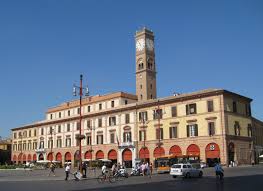 My name is Emely and I spent a semester in a small town in Italy from February to June. This blogpost explains how that was for me, from before departure to my homecoming.

Before I got to Italy I had to find somewhere to live. Luckily, in Forli they have an organisation that helps you with this called Koine and it is all very easy. Around November they came out with a webpage where I could look at pictures, prices and information about available flats. I then had to make a list of choices, and in December they sent me an email telling me about the flat that I got.

When it comes to my thoughts before I left, I did not really have a lot of expectations. I was so focused about going there to learn the language that that was all I could think about. The language was my main reason for going, so I was very excited to learn it in the country it is spoken. Another reason for me to go was that I wanted to prove to myself and everyone else that I could do something like that entirely on my own. Little did I know what this semester would bring when it came to traveling and being social…

I was so excited to go just until a week before I left (in February), then I got really scared and sad about leaving my life in London.  The flight went fine, and when I got to Bologna I had to take a train to Forli. This is when the culture shock hit me. I had never thought that I would get a culture shock when going to Italy, another country in Europe, and the country my boyfriend and his family is from, but I did. When I was at the train station I was all on my own, and the main language was suddenly not English (or Norwegian) anymore. A man said he would help me to find the right platform, and I thought he was being nice. When we got to the right platform he demanded 30 euros from me for helping me. I was a bit shocked, but strictly told him no. Luckily he went away.

On Sunday I could finally move into the house and when I got there I met my flat mates, a British girl, a British boy and Spanish boy. They welcomed me so well and already on Monday they invited me out. The rest of the week was filled with social stuff happening, and I actually did not have a chance to unpack completely before the weekend.

The week after was the first week of school, and I got to attend some classes and then chose which ones I wanted to take. I quickly decided that I wanted to take modules that looked interesting, but still ended early, because in the Economics department I could end my exams in June or mid July depending on the modules. I also decided that I did not want to take very difficult classes as this semester would mostly be about exploring Italy and getting new friends. So in the end my modules were:

The Italian course was one of my favorite classes and we had four hours every week, which is really good. I had to take a test before I started the class and I found out that I was between two levels (A1 and B2) as I had already taken classes at Westminster.

I have definitely improved my language skills – I understand a lot, now I just have to dare to speak. When I left I was in that in-between-phase, and I can imagine that if I had stayed another semester I would be able to speak Italian almost fluently.

When it comes to the Italian school system it is quite different. It was funny to see that some of the Italian stereotypes were right, such as the way they are being very relaxed and unorganized. The way the module is thought and the way we are being assessed is completely up to the teacher. However, in all of my modules (except micro) I had some sort of in-class assessment – group work, essays, presentation, etc, and then an exam at the end of the module. Even though I did not study as hard as I normally would, I got high marks (all over 25 out of 30).

One thing I had not thought about before leaving was how my social life would be. I had hoped I would stay with Italians so that I would get better at speaking Italian, but unfortunately I ended up not living with any Italians. As many of them are not so good in English, I think that my language skills would have been so much better if I had lived with Italians as I would have to dare to speak more. Other Erasmus people that lived like this improved their language skills a lot. My advise for people wishing the same as I did, would be to ask Koine which of the apartments had Italian people living in it. Maybe they could have arranged something.

Even though I was a bit disappointed by this, I ended up having the best flat mates, and we had a lot of fun together. They had been living in Forli since September so they already knew a lot of people. They invited me with them from the beginning, so it was easy getting new friends.

The social life in Italy and all the people I met there is definitely the thing I miss the most. Something I had not expected before going there… When it comes to missing home, it was worst the first weekend, but after that I was just excited about all the things happening.

I also got a chance to visit some other parts of Italy and Verona, Milan, Venice, Bologna, Lake Garda and Cinque Terre are just some of them. After I finished my exams me and my boyfriend bought interrail tickets and we got to travel a bit more in Italy for three weeks. We went to Rome, Venice, the country side and Milan. I definitely recommend doing this after a semester abroad, especially if you did not have time to travel during the semester. My Swedish exchange friend travelled for 50 days alone after her semester in Italy and she met up with people we had become friends with from all over Europe.

It was very strange coming home after a semester like that. It felt like I had been in a bubble. My friends in Forli used to call it the Forli bubble because we were living in this small city, being in a group of people that we met at least two or three times a week. So it was weird coming out of that bubble that no one at home knew. I also had this good feeling of accomplishing something. I had actually managed move all alone to another country for a semester. I know now that I can do something like that on my own. I was excited to go home because it was sort of like the finish line. That is when the semester would officially be over, and I would have managed it. It has been of one of the best 5 months of my life, so the flight home was a bit bittersweet.

I would definitely recommend going a semester abroad, and definitely to go to Forli in Italy. The semester has been such a good experience and I have learned a lot about myself. I have met amazing people and made close friends, I have eaten really good food, travelled a beautiful country and learned their language and their customs. In Forli I think they are very good at welcoming you and it is not difficult to meet new people. I also think it is a good thing that it is a small city as it is easier to meet up with people. The Erasmus students became very close.

Emely Hovde Olson is a Business Economics student in her final year and a student course representative.