It is commonly said that London is just rampant with Australians. However, besides the engineer in my accommodation, I had not met any. So naturally this just made me that much more excited for Australia Day, a day I had been looking forward to since I touched down in London.

It was a little bit chillier in London on the 26th January. However, nothing was going to bring me down on that day. Not even a passive aggressive text from the lawyer. To which I replied with a photo of myself doing the thumbs up, captioning it: no worries – how bludy Australian. 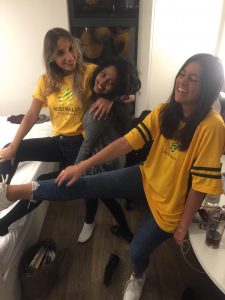 The girls had been supportive of this day from the start. They were down for whatever event I wanted to go to. No one complained about the cost, the date or any logistics. Canadian Emily, in particular, is one of those souls that was supposed to have been born somewhere else, her blood oozes true blue. The natural beauty did an exchange to Australia a few years ago and still goes on about her love for the country, like on and on. While I pretend that it is nothing special to her face, deep down I’m so proud she loves my home so much.

Before I left Australia my dad, who has lived in different countries throughout his life, told me something that has stuck with me: you won’t experience pride for your country like you will when you are overseas.” At first, I thought that was ridiculous and probably a slight exaggeration but now I get it.

We went to the Clapham Grand, funnily enough, the same place I went for the Spice Girls 20th-anniversary party. It was insane and possibly the best Australia Day I have had in my adult life. Nothing could obviously beat my childhood. I would go to Circular Quay in matching denim outfits with my little sister, eat mickey mouse pancakes and then wave at our friend who is in the water police, it was a tradition that stuck for many years.

However, this year my Australia Day consisted of a massive room filled with patriotic Aussies who all had one thing in common: we all missed a little part of home. At midnight, the national anthem rang and themed balloons dropped from the roof, from then on it was dancing till dawn to the greatest Aussie songs in existence (okay slight exaggeration I was fast asleep by then).

What I did love about this event was that I got the chance to meet some pretty interesting Aussies, partly because Emily was doing a radio project and we had to interview people. What a look that was, carrying around microphones and recorders hounding people in the bathroom line. However, I might not have met all these people if it wasn’t for Emily.

I learnt something important that night: there are really great people from all walks of life anywhere you go. It’s all about putting yourself out there and making the first move to find them. I think it’s all too common for us to shy away from initiating a conversation, especially with someone of the same gender. We just assume people don’t want to be bothered but there rarely is the case, especially with Australians.

Out of all the events meant to be in London that night, I picked that one. It was everything I had wanted it to be and more. Home never felt too far away and I know that is mainly because of the quality of friends I had around me that night.

So, bring on Canada day girls!

Read this post and other stories on Madison’s personal blog