A glimpse into the archives 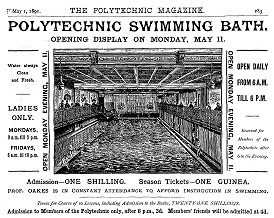 The Archives Team at the University have each picked their favourite object from their collection, deep in the basement of Little Titchfield Street. Each one reflects a unique moment in the rich history of the University.

You can find out more about the collection, research, online resources and catalogues here. The Archives Team is also always happy to hear from people who would like to submit an Oral History. 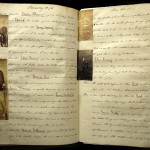 The Castle Street Journal was compiled by Henry Offer,
the manager of the Castle Street Working Boys’ Home.  Offer used the journal to record detailed comments about the boys attending the school, including their backgrounds and their futures.  Many entries also include photographs
of the boys.  The journal covers the period 1867-1872.

Having passed through various hands since those of Offer, the volume was acquired by the University Archive when it
was put up for auction in 2010.  It provides a rare insight into the lives of Victorian working class children in London. 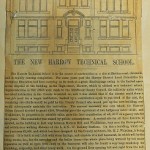 Harrow College of Education was established in 1887 by Marian Hewlett who decided to begin art and domestic science classes for girls in Harrow. Becoming Harrow Technical College and School of Art in 1948 and then Harrow College of Higher Education in 1978, it merged with the Polytechnic of Central London (PCL) in 1990 and has continued to be the home of our arts, design and media courses.

Sadly, many of Harrow’s records have not survived but the University Archive does hold prospectuses from 1945, administrative records, student handbooks and photographs. Three volumes of press cuttings from 1901-1964 have also survived. Mostly taken from the Harrow Observer, these cuttings help fill in the gaps in the institution’s early history, a history which is as long as the Polytechnic’s and would otherwise largely be lost. The volumes also feature many early photographs of the College. 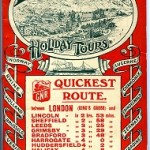 The Polytechnic Touring Association (PTA) dates back to 1888 and was a travel agency for members of the Polytechnic.  Starting out with holiday homes in Britain,
the PTA offered trips to the World Fairs in Paris and Chicago and purchased a steam yacht for tours to Norway and chalets in Lucerne, Switzerland.  The PTA was run as a separate company from 1911 before becoming part
of the Lunn Poly chain in the 1960s.

The PTA collection comprises photographs, postcards, correspondence and administrative records, brochures and leaflets.  We have also recently digitised two travel films made by the PTA which can be viewed on YouTube. The collection has been the focus of two PhDs and is a rich source of information for the study of marketing, tourism, graphic design, history and sociology. 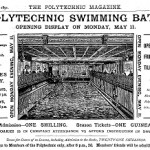 The swimming pool was added to 309 Regent Street
shortly after Quintin Hogg purchased the building and was opened in 1884. It served a dual purpose. Each winter, to save on heating costs, the water was drained and it was used as a reading room. The swimming pool was used by members of the Poly, the public, the Polytechnic Secondary School boys and by the various Poly clubs and societies over the years, including for example, the water polo team and the sub-aqua club. Admission cost 6d 1s.

Due to health and safety concerns it was closed in September 1981 and in 1995 it was converted into a social and study space for students retaining some of its original features, and renamed The Deep End. In the Archive we have photos, testimonies of people that used the pool, articles, and adverts for its opening.

Archive Services is keen to hear from any alumni who attended Harrow College of Higher Education and from any alumni who studied at the University of Westminster between 1990-2005. Please help us compile an oral history of what it was like to be a student here. For more details and for excerpts from interviews please visit westminster.ac.uk/oral-history.