London, the city where nobody can spell my name

My name is Dalma, not that difficult, I thought. It isn’t an international name, I know, but it is not difficult to say or remember. Yeah once again, I thought. The first sign was when I introduced myself to other people they asked again what my name was, they just didn’t understand – I thought. Luckily, I had my ID with me so I always showed it and then they got it.

I went to the opening event of one of the societies and there was a girl who interviewed new students. She asked me if I could say a couple of words, of course why not. The interview started and I was asked to introduce myself, name, nationality, course etc. I said “I am Dalma from Hungary and studying Marketing Management.” After the event I forgot the whole thing but maybe a month ago it just came into my mind so I searched for the post. After a while I found it and as I was looking for my part, I noticed a sentence: “Donna from Hungary…”. I was shocked, is it me? Yes it was…

Starbucks: are they doing it on purpose? 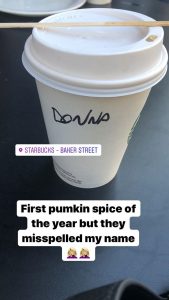 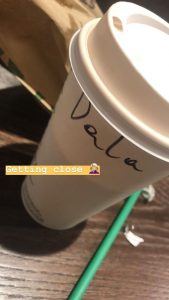 red on my first Starbucks order in London. The barista asked my name and I said it confidently, she asked it again and I said it again. She wrote it down but when I was waiting I noticed a cup waiting to be picked up with the name “Donna” and my order. It was mine, I was just standing there and wondering what’s wrong with my name.

After this experience, I tried to spell it, most of the time it worked, but once even though I spelt it the barista left out the “M” from my name. I just laughed because it was so hilarious and I couldn’t believe that I spelt it and he wrote it down wrong.

And after all of this I just literally gave up, no spelling, no getting upset. Just saying my name and got my coffee as they understand. That how I was “Delma” after the girl repeated my name sounded “Dalma”. 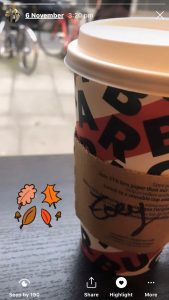 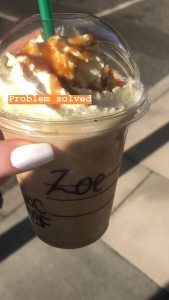 As a solution, I came up with a name which I really like – it’s international and hard to get wrong. I started to say “Zoe” as my name and what a miracle they write it down correctly! However, I ordered twice with this name and they spelt it differently but it didn’t matter, it is correct both ways.

In conclusion, I realised that my name is alright but not for this country. However, I get used to people not understanding my name or misspelling. Now I am just collecting the versions and without them this post couldn’t be written so thank you! 🙂