The Study China Programme is managed by The University of Manchester and funded by the UK Government Department for Education. It is a 3-week programme during which you will not only complete an intensive Mandarin course, but you will also get the chance to interact with Chinese students, academic staff, local families and businesses.

Applications for summer 2018 are now open. Find out more about the programme in Sophie’s blog!

Why did you decide to apply for the Study China Programme?

To be honest, it has always been a pipe dream to travel to Asia and visit countries such as Japan and China. Sitting in my Halls of Residence back in May, in the middle of my biggest deadline of my second year, I applied for the Study China programme. I had absolutely no expectations of even getting an email back, never mind a place, but by the end of the month I found out that I had been accepted. I was being offered a place on the trip!

The next few weeks flew by with very short deadlines being set for inputting personal information, choosing a priority list of prospective universities in China and then booking flights. I was lucky enough to receive a place in my first choice university: East China Normal University, based in Shanghai – I was thrilled. August 4th came round all too quickly after that and the nerves started kicking in. What had I gotten myself into? Who was I going to meet? Was I going to like China? The information was about to unravel itself. 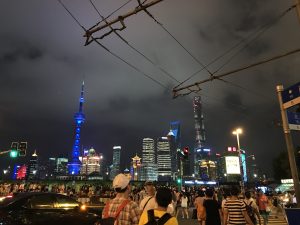 Tell us a bit more about your experience: What was it like to fly to China on your own and what were your first impressions?

This was my first solo trip. Now, I don’t like doing things by halves, so I decided that on this first solo trip and indeed first solo flight of my life I would make it one of the longest too: 15 hours in fact. And in the end, when you added in the delays I had in Charles de Gaulle
airport, it was hitting above 20 hours of solo travel. I arrived into Shanghai Pu Dong airport at around 7pm, my body clock by this point was ruined and I just wanted to be able to get to the university campus accommodation and get some sleep before the morning after’s agenda.

Before arriving on the Study China programme, it was explained to me that this was going to be a cultural and educational trip, showing me a part of China that I may not normally have had chance to see for myself. I was told that the programme consisted of 40 hours of Mandarin classes split over a 3 week term, cultural trips in and around Shanghai and an overnight stay in two local cities of Shanghai.

The first week was hard. It was hard to settle into the time difference and jet lag, the language barrier and the cultural differences. Another thing that was particularly hard to get used to: THE HEAT!! Days were extremely hot with no let up in the evening as the sun set. Temperatures usually were between 35 and 40 degrees with extreme humidity that I had never experienced before. We were quickly told how this particular summer was the hottest Shanghai had seen in over 20 years…

A couple of the girls I became friends with quickly found China’s answer to Manchester’s Trafford Centre: Global Harbor, a huge 7 floors worth of shopping centre built by the same architect who built the one just off the M60! In it we found a Chinese Tesco, called Tesco on all the store guides and shopping bags, but no-one knew what we meant when we asked “Where is Tesco?” – turns out it was actually called Vanguard, but just sold Tesco branded stock.

I might sound quite uncultured, but by the middle of the first week we were already fed up of having rice or noodles for breakfast, lunch and dinner. We were used to a bit more diversity in our diets and were getting a little stir crazy with the food and craved some little piece of home. Global Harbor was the place! Italian, Mexican, Steak, fast food, you name it, it was there!

How did you find the academic programme?

Mandarin classes started quite early (8:45am) and lasted until around lunch time where you were able to either have the afternoon to yourselves or soak up Chinese culture in either song, calligraphy or Tai Chi. It was great to learn about what the Chinese people actually did in their spare time or what music they liked to listen to/what was popular. We used our recently taught Chinese skills to pronounce words in songs or to write different Chinese characters on keepsake fans for example.

It was also great to know more about MoBike, a system that has recently been introduced to Manchester City Centre, (near my hometown and the city in which the Study China programme originates.) This MoBike system and many others are all over China, with many pedestrian
walkways crammed with push bikes, with the popularity to cycle everywhere becoming the latest huge trend!!!

On our first weekend in Shanghai, we were welcomed into the homes of a local family. We hardly knew anything in Chinese so we were relieved to find out that our family spoke English. We spent the entire day with them, going to a local calligraphy museum, a few shops and then back to their house to play games and help cook dumplings. We stayed for dinner with them and spoke about how our lives differed,
education, jobs, travel and food etc. We were surprised to learn that the mother of this family had actually been to the UK on business and quite near to my hometown no less. We soon realised that the world is a small place!!! 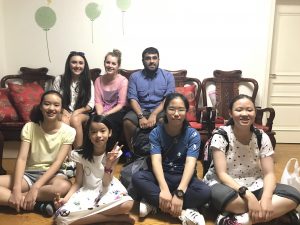 Now that the programme is over, any plans for the future?

By the end of the trip, I wasn’t expecting to be able to speak fluent Mandarin or anywhere near really. It’s an extremely hard language to learn and an even harder one to master, but I got by in restaurants and shops. I am currently doing an internship in Stockholm (Sweden) and I am even using key phrases in the Chinese restaurant here in Stockholm, much to the surprise of the Chinese owner!!! I have come away feeling quite attached to China, its people and its ways. Yes, it’s extremely different to anything that I’m used to, but I have to say that I miss Shanghai and actually cannot wait to have the opportunity to be able to go back in the near future!! 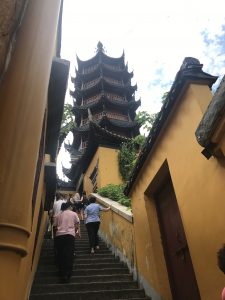 Have you got a story to share with us? We would love to hear from you! You can submit your testimonial here.