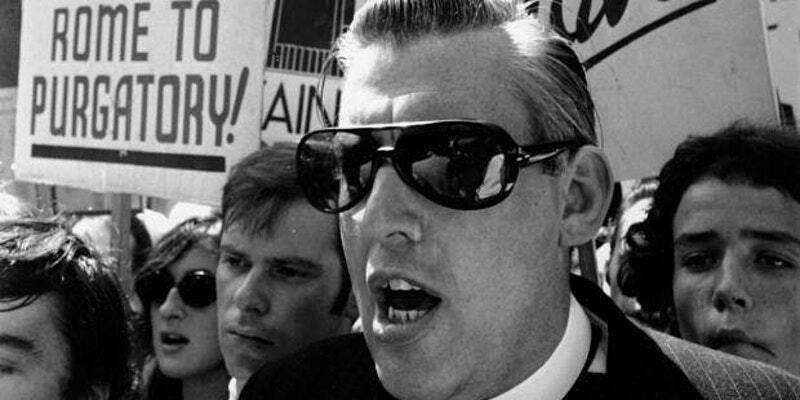 Some considered Donald Trump a phenomenon, unlike any other. His populist presidential campaign and subsequent presidency exhibited a wanton disregard for women, and his convictions aimed to entertain whilst instil fear. However, many features of Trump’s repertoire paid homage to Reverend Ian Paisley during the 1960s and 1970s. Well known for his rhetoric, Paisley’s preaching and writings were experienced as ‘a powerful catalyst for bigotry’. As well as notably voicing strong resentment towards the Pope, Paisley routinely used sexualised language to convey contempt in order to gain and maintain support for his ‘firebrand’ politics. His fundamental aim, to denounce Catholicism and rally support for his charge to dominate Ulster Unionism.

On International Women’s Day I presented my research paper about Reverend Ian Paisley and the sexual curiosity of anti-Catholicism. Paisley was one of the most influential individuals throughout ‘The Troubles’ (1968-1998) in Northern Ireland. A sectarian genie; Paisley was an enigmatic and charismatic character. He became one of the most ardent representatives of Unionism and to many, he represented the true protector of Ulster’s Protestant faith. Historians have coined the term ‘Paisleyism’ to describe his movement; he founded his own religious denomination, Free Presbyterian Church of Ulster in 1951; his own newspapers, The Revivalist in 1955 and the Protestant Telegraph in 1966; and even his own political party, the Democratic Unionist Party (DUP) in 1971.

Much of Paisley’s popularity was due to the dissemination of sexualised rhetoric and pornographic texts, as well as his depictions of women as ‘Jezebels’ and ‘Whores’. Through his anti-Catholic preaching and writings, Paisley became a powerful Svengali who provided an ‘unashamed appeal to the sexual curiosity of the strait-laced Northern fundamentalists’. His use of sexualised language in sermons to denounce Catholicism led one government official, Bob Cooper, to dub him ‘the great pornographer’ in November 1973.[1] Cooper attended a sermon preached by Paisley in Belfast’s Ulster Hall the night after Pope John XXIII died and recalled hearing Paisley describe ‘the flames of hell at that moment licking around the dead Pope. It was so graphic and colourful that the audience could almost feel the flames and feel the heat. I will remember the horror till the day I die’.

Paisley frequently defined the Pope, Rome, and Catholic faith as ‘the other’ in the form of a female entity (she/her). The Whore of Babylon was a vital feature of his rhetoric, to warn of the dangers of the Church of Rome. Introduced in the Revelation of St John the Divine[2], the Whore of Babylon defined a female harlot to blame for the ‘fallen’ state of humankind – which Feminist theologians have denounced as a misogynist male fantasy of the end of time. The book of Revelation constructs political and social relationships through the language and imagery of desire and gender, all of which was readily apparent in Paisley’s oratory: ‘we are here to DEFEND the Gospel… with our blood like the martyrs of old who would not bow to the forces of Popery, and the scarlet whore drunk on the BLOOD of the Churches’.

Paisley’s newspapers also capitalised on the idea that sex sells. It is interesting to note that erotic literature has long been a vehicle for anti-Catholic sentiments. The Protestant Telegraph gained an estimated circulation of about 15,000 by 1973 and through ‘pornographication’ it formed a gateway to produce oversexualised language and its scandalous stories appealed to tabloid style amusement. To put it as bluntly as the New York Times, ‘politics may be serious but it’s crime and sex that sell newspapers’. Stories served to whet readers’ appetites, and then focus upon strong attacks of opponents. This constructed a boundary between ‘us’ – the appalled and righteous Unionist readers – and them – exposed Catholic villains. During a time in which sexualised and misogynistic practices became commonplace in media, such as the emergence of ‘page 3’ in The Sun in 1970, it is interesting to note how eroticised literature served two purposes: to entertain whilst also inflict an agenda.

It is important to consider the ways in which gender and sexualisation are used for political gain. The use of misogyny as a tool for dubious purposes is as prevalent now as it has been throughout history. Following de Beauvoir’s logic that the epitaph ‘whore’ is flung at women who assert their economic or political independence, Catholics were defined as the Whore of Babylon to repress their progression in society. The fear of deviant women worked hand in hand with the fear of the Catholic Church. To a large degree, Paisley was not the pioneer of his language – instead, he capitalised on the idea that Catholicism seduces its advocates. In great measure it was his rhetoric, much of it misogynistic and highly sexualised, which acted as a catalyst that led to his recognition and the start of ‘The Troubles’, demonstrating the sexual allure of anti-Catholicism.

Rose Hayden is a Doctoral Researcher in History at the University of Westminster. Her research centres around gender, conflict and press with a particular focus on the Northern Ireland ‘Troubles’. Rose’s thesis focuses on representations of women and assesses the role of misogynistic and sexualised press and rhetoric in exacerbating conflict.