‘Hello everyone, I’d like to introduce myself. My name is Luka Zumbach. I’m a student currently living in the United States. I was accepted to the Designing Cities course this summer, then decided to go for a deferred entry and take a gap year. I spent three months abroad where I gained valuable experiences. Following Giulio’s suggestion I’d like to share them with you, specifically what I learned regarding urban development’…

I chose to join an educational program that allowed me, together with a small group, to travel to the completely novel context of Nepal, a developing country in South Asia. Our itinerary consisted of a ten-day rural and five-week urban homestay, a visit to a Buddhist monastery and a 16 day trek in the mountains. We had daily lectures on sustainable development, culture, and religion, were learning the language to a certain extent and did independent study projects on traditional art, craft and instrument. Due to my fascination with cities I also did research on the urban development of Nepal.

Overwhelmingly, the urban population of Nepal is concentrated in the Kathmandu valley, a large area that used to be covered by a lake. It has always been central to trade and exchanges. There are three medieval compact settlements in the region that for most of Nepal’s history maintained a limited size. Kathmandu like many cities in Asia has experienced immense population growth in the past 40 years. (Population 1980: 235’000, Population 2016: close to three million.) Since Nepal has entered the global economy, investment has flowed into the valley. The government’s attempts to spread out economic development and quality services to the rest of the country failed for the most part. This is the the reason for the massive rural to urban migration that has occurred. Jobs, technology, access to healthcare, consumer goods etc. provide incentive to move to the city. After our village homestay we were told that all of our families had sold their land and were moving to the city. A real estate developer is going to build vacation homes for the metropolitan elite of Kathmandu.This came as a big shock to all of us because living closely with these people showed us the beauty and advantages that village life actually can provide over living in the city. The village has a healthy socially supportive communal environment. In the city, this community is lost due to everyone having to fend for themselves trying to get by on a low wage job. Families are largely self sufficient in villages by growing their own food, whereas in the city rising food prices further strain an already small income. Kathmandu is also a highly polluted city, which has severely adverse effects on peoples health. The World Bank classifies Nepal’s rural population as living in greater poverty than it’s urban population. From a purely financial perspective this assessment is accurate. However from what I’ve seen a large proportion of it’s urban dwellers suffer more. 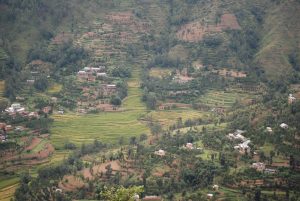 With a growing global population dense cities will be necessary to ensure a sustainable way of life. However a city needs to provide physical and psychological health to it’s residents. What I’ve learned from living in a village is that the advantages of communal and subsistence life shouldn’t be dismissed. I think urban farming, especially as community oriented projects can reduce people’s vulnerability through more self sufficiency, through sales of surplus provide a source of additional income, reduce energy consumption and pollution created by conventional commercial farming/transport of foods and improve people’s psychological health through the social connection of a community.

These are to me the most valuable thoughts I can take back from this trip and I’m keen to see how they fit into our western context. I look forward to starting the Designing Cities course in September 2017.