The University of Westminster’s China Visual Arts Project Archive is a unique archival collection, providing a window into the visual culture of China from the 1940s to the 1980s. At the heart of the collection are 843 posters covering not only politics but all aspects of life since the establishment of the People’s Republic of China.

The collection was founded in 1977 by John Gittings, writer and former China correspondent for the Guardian, when he worked in the Chinese Section of the Polytechnic of Central London (PCL). As well as Gitting’s own posters, many more were donated by colleagues, students and friends who lived, studied and travelled in China. Working with researcher Anna Merton, Gittings divided the posters into the 17 thematic categories, most of which are still used today. Half of the collection dates from the ten-year period after Mao’s death (1976-1986), while around a quarter of the posters were produced during the Cultural Revolution (1966-1976). For many years until 2008, the collection benefited from a long-term loan of posters from the Cultural Revolution by Paul Crook, son of Isabel and David Crook, who was a high school student in Beijing at the time. It also acquired a number of items from the 1950s.

Although the collection has become known for its posters, it also includes books, objects and ephemera, such as toys, badges, ration coupons, postcards, picture books and paper cuts, and a large collection of slides depicting China in the 1970s. These items are gradually being catalogued and made available to researchers.

After Gittings left PCL in 1983 for The Guardian newspaper, the collection remained in the School of Languages, managed by Harriet Evans, then Senior Lecturer and Head of the Chinese Section.  It then moved with her to the Centre for the Study of Democracy in 1999, where it had a dedicated space on the 4th floor of the Wells Street building, and then in 2009 to the newly established Contemporary China Centre in the Department for Modern and Applied Languages, Emily Williams, then a doctoral student with the London Consortium working on British Collections of Cultural Revolution Material and Visual Culture worked as Research Assistant to the collection between 2012 and 2014. Emily supervised an upgraded version of the website, attracting considerable attention from researchers, film-makers and publishers across the world. Both she and Harriet made use of the collection in outreach work with London primary and secondary schools.

A first exhibition entitled Popular Political Culture in China was held in 309 Regent Street in 1979. The first large-scale international exhibition, ‘Picturing Power in China: Posters of the Cultural Revolution’, co-curated by Jeffrey Wasserstrom and Harriet Evans, was held in 1999 at Indiana University and Ohio State University in the USA. Katie Hill became curator of the Collection in 2000, when she developed its first website. In 2004, she curated an AHRB-funded exhibition, ‘The Political Body – Posters from the People’s Republic of China in the 1960s and 1970s’, shown at the Brunei Gallery, School of Oriental and African Studies. Since then exhibitions of the Collection’s posters have been held in the UK and Europe, the US and Australia. The last significant exhibition was curated by Harriet Evans in 2011 in 309 Regent Street, entitled ‘Poster Power: Images from Mao’s China, Then and Now’.

In the mid 2000s, Hu Jie, China’s well-known independent documentary film maker and Ai Xiaoming, feminist film-maker, professor of Comparative Literature at Sun Yatsen University, Guangdong, and recipient of the prestigious Simone de Beauvoir prize in 2010, spent a few weeks as visiting researchers working with the posters when they were still part of the Centre for the Study of Democracy. Their work resulted in two short documentary films: “Painting for the Revolution: Peasant Paintings from Hu County, China “ (Wei geming huahua, 2005), and “Red Art” (Hongse meishu) (2007).

In 2015 the collection was transferred from Wells Street to the University of Westminster Archive, where Senior Archivst Anna McNally became responsible for it. Although known as the Chinese Poster Collection for some years, the decision was made to revert to the collection’s original name, in order to reflect the true scope of its contents as a combined visual, material and textual resource for the teaching and learning of the Mao era.

In 2016 Yishu (Cassie) Lin, a doctoral student and Archive Assistant at the University of Westminster, helped prepare the collection and its catalogue for a new stage of public access. She also made a short film about the China Visual Arts Project, which you can watch below, introducing the posters and her personal perspective as a Chinese national. You can also read Cassie’s blogs on the collection in the section under the video.

Access to the collection has greatly increased following its transfer to the University Archive and items in the collection are regularly used in teaching while external PhD students and others continue to access the collection for research. The posters were photographed in April 2017 by David Freeman at the University’s Harrow campus. The new catalogue went live in January 2019; Google Analytics data (applied from May 2019 onwards) show 10,981 visits to the site in the nine months between May 2019 and January 2020 which is clear testament to the significantly enhanced reach of the collection. Since the launch of the Contemporary China Centre blog in October 2019, the associated Twitter account, @CCCBlogUoW, also regularly showcases posters from the collection, creating an important link between teaching, research, and public engagement. Broadening access to the collection through the use of IT and social media has breathed new life into the initial intention of its founders.

You can find out more about visiting the University of Westminster Archive’s China Visual Arts Project here or follow us on Twitter @uniwestarc for our latest news.

A Throw Back to School Days 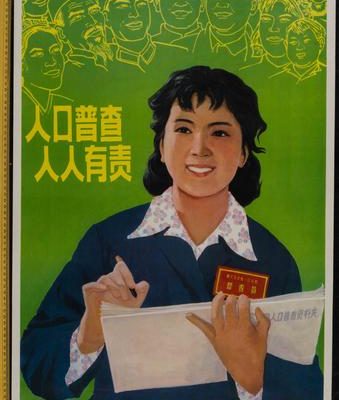