Event Report: Racism and Orientalism – A Roundtable on Racialised Discourse and COVID-19 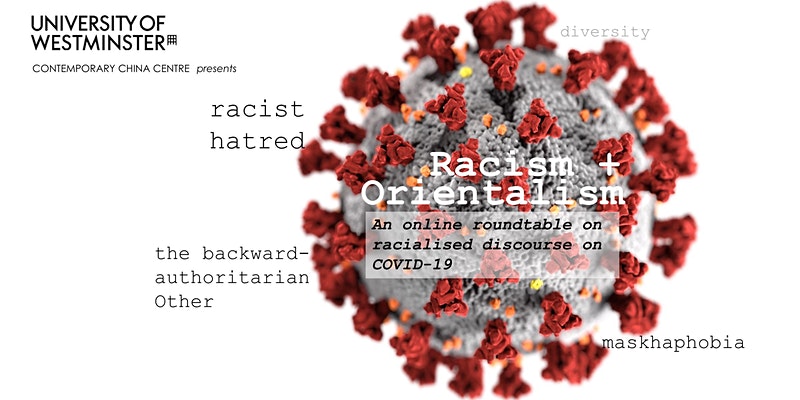 In the months following the outbreak of COVID-19, UK agencies monitoring racial inequality reported an unprecedented number of referrals from East and South-East Asians. Despite this surge in racial violence, there has been relatively little attention or action from the government.

On April 30th, the Contemporary China Centre organised a roundtable discussion to discuss racialised discourses on COVID-19. The panellists included Dr. Diana Yeh (City, University of London), Flair Donglai Shi (University of Oxford) and London-based journalist Sam Phan, and the roundtable was chaired by Dr. Shzr Ee Tan (Royal Holloway, University of London). This short report summarises some of the key topics that were discussed.

Dr. Shzr Ee Tan opened the roundtable with some observations on the importance of calling out the emerging racism(s) that have arisen as a result of the COVID-19 fallout. She argued for “the need to take a deeply intersectional perspective towards understanding these racisms as global, systematic and deeply-entrenched in pre-COVID-19 structures.”

Although the outbreak of the virus has served as the most recent catalyst for racial violence across the globe, Dr. Tan stressed that racism should not be thought of as a singular global phenomenon but rather a transnational phenomenon of racism(s), each manifestation with its own complex history and narratives.

Our panellists began by taking up this point. Looking at the influence of anti-Chinese concepts such as ‘Yellow Peril’, as well as the notion of ‘colonial temporality’ that have historically established the Chinese as ‘Other’, they argued that racialised discourses of COVID-19 were enabled by deeply entrenched structural inequalities that have existed since the beginning of the 19th century.

Our panellists also traced the origins of how discourse around the virus became racialised in stages of what Flair Donglai Shi called ‘concentric circles’ of racism. Shi described how, at the outset, Wuhan residents were the first to face discrimination by residents from neighbouring cities in Hubei Province. As it spread from city to city, province to province and country to country, the virus soon became racialised as Chinese.

The roundtable then moved on to examining the ways in which COVID-19 has become politicised and weaponised for various forms of violence around the world. Examples of this can be seen in white nationalist movements in the US, police brutality against North African people in France, and the eviction of African nationals in Guangzhou. Domestic policies, border controls, and diplomatic donations were also discussed, as well as the surge of anti-foreigner and anti-international student sentiments across different countries.

While many of us experience similar types of discrimination on the basis of our appearance, it is also important to acknowledge that different groups experience racism in different ways. Returning to some of Dr. Tan’s opening comments, the panellists also discussed how COVID-19 has forced the race debate around previously invisibilised East Asians (as opposed to non-white people of colour as a whole) to take place in a more serious and public manner in the UK.

As our panellists argued, East and South East Asians are not exempt from practices of racism and racial violence. Dr. Diana Yeh argued that there are “hierarchies within hierarchies,” variously structured around ethnicity, nationality, class and gender. She also discussed the model minority myth, and what all these issues mean for working towards interethnic solidarity.

Language was also a key talking point. Sam Phan explained how the use of language has always played a significant role in enabling and embedding racist discourse towards people of colour. Racial slurs such as ‘Kung Flu’, for example, demonstrate how discrimination and abuse towards East and South-East Asians in the UK has been met with humour rather than compassion.

Another example of the damaging use of language is the framing of recent racial attacks as singular incidents of ‘hate crime’. Dr Diana Yeh argues that the concept of hate crime is damaging because it individualises and trivialises racial violence, obscuring it from institutional forms of racism. Moreover, when framed as victims of hate crime, people are presented as powerless and in need of help instead of empowered to analyse or resist the racial violence. Downplaying the severity of racism also helps to detract from governmental failures.

Among the other important talking points that were discussed was the hypocrisy in the Western media when it came to very different portrayals of lockdown in China and those in Western Europe, and how this served to reinforce an image of China as an authoritarian other. The ways in which COVID-19 has also intersected with widespread Islamophobia, both inside and outside the PRC, was also raised.

Submissions from the Q&A raised the important question of how to build greater understanding and collaboration. The panellists suggested that collaboration can only occur once we raise the level of consciousness around racism and the importance of speaking out. One example that Dr. Yeh discussed, was the #IWillEatWithYou, which focuses on showing solidarity to local East and Southeast Asian restaurants that were impacted by racial discrimination. The panellists also acknowledged that there is always more work to be done to diversify the debate beyond the scope of the UK and US in order to amplify marginalised voices around the globe.

It was validating and empowering to see an event addressing racism and orientalism taking place in the form of a public roundtable in the UK. It is hoped that the roundtable has contributed to the goal of raising the collective consciousness on racism, paving the way for greater discussion, solidarity and collaboration moving forward.

Lisa Wang is a Global Mental Health advocate and holds a Masters in Philosophy and Modern Languages from Oxford University. She founded Mentao Health, an online educational organisation that offers culturally sensitive mental health support and training to improve the wellbeing of the East and South-East Asian global community. She is a certified Mental Health First Aider, a Time to Change Champion at Mind and delivers training on Diversity & Inclusion to corporate and healthcare organisations.