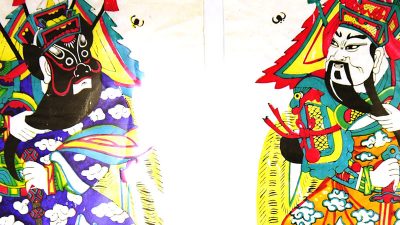 First of all, I would like to wish everyone a fabulous Chinese New Year! It’s only the 3rd New Year’s Day and traditionally it lasts 15 days (much more luxury than Christmas holiday I presume), there are still more red envelopes with lucky money in to come!

Last week, right before the Chinese New Year (also known as the Spring Festival), I came across some lovely old ‘Nian Hua’ (New Year Pictures) from the poster collection. Nian Hua is a traditional decorative art especially made for the New Year. It is fashioned back in the Tang Dynasty (618 -907 A.C.), originally made in a form of Chinese colored woodblock print (a very ancient technique) on textiles or rice papers. Nian Hua became extremely popular in the Qing Dynasty (1644 – 1912 A. C.), its significance can be equalled to the star on top of a Christmas tree. As each New Year arrives, customarily, every family replaces its Nian Hua in the household, in order to ‘Say Goodbye to the Past and Welcome the Future.’

The popularity of Nian Hua started to decrease since the early 1990s. People, especially those in cities, were influenced by modern arts to see Nian Hua as aged and staid. Unfortunately, my family was part of them. Nian Hua never was a traditional New Year decoration in the household when I was growing up. (I did confronted my mum about it last week, and she defended, “I get thematic flowers and plants every new year.” Oh well.)  So, you can imagine the fascination I had when discovering these dated Nian Hua in the Chinese Poster Collection, mythical characters and gods still vividly colored on delicate rice papers, so beautifully illustrated, too beautiful that I almost took them home for decorating the coming new year.

I was specially enchanted by Nian Hua of the Chinese Door Gods. They are often come in pairs to be placed on each side of an entry to a temple, home or business. The Door Gods are believed for keeping evil spirits from entering. Most of the two-piece Door God Nian Hua were separated in the poster collection, and I decided to put each pair into one melinex (Archival polyester sheets, for the transparent protection of manuscripts, comics, prints and drawings), so it’ll make more sense. I had a vague concept of the Door Gods but never know who they really are and what historical figures they refer to, and most importantly, how to pair them correctly.

For example, take a look at these two colourful door gods waving animated swords and riding on cute little ponies (a very efficient way to fight away the devils I believe), I had to google their names (as humiliated as it sounds), ‘Qin Qiong’ and ‘Jing De’, then learned they are these two generals from the Tang Dynasty. At the time, in order to award their excellent military achievement, Emperor Taizong ordered portraits of  Qin Qiong and Jing De, for them to became the prototypes of the Door Gods. Traditionally, Qin Qiong is white-faced and should be placed on the left, while Jing De is the black-faced one on the right. (I am wondering if they would play the god cop/bad cop game when dealing with evil spirits.)

The Door Gods later expanded into different characters and meanings over the years, such as the God of Wealth, the Kitchen God and all other genres for fulfilling people’s new year wishes comprehensively. It is a wonderful convention and for me, it’s worth keeping. Not for the purpose of superstition, but for people, especially younger generation, to learn a little lost history related to the Chinese New Year. If you still have some unreleased new year’s wishes, come to the Archive Service and meet our Chinese Door Gods, I’m sure they’ll be happy to help.