Names from God: The power of Protestant names in China

Zheng Shengjie, a second-generation Christian, is a young preacher and one of the leaders of a growing Three-Self-affiliated congregation in Huanghaicheng. Shengjie was originally named Zheng Xinkai by his mother, a clear reference to Deng Xiaoping’s ‘reform and opening policy’ (gaige kaifang) of the early 1980s. His mother’s reasoning for choosing such a name was due to ‘her strong patriotic feelings’ (ta dui guojia de re’ai: lit. ‘her strong love for the country’) and the hope that her son could contribute to the reform process. Shengjie’s mother converted to Christianity when he was five years old, and when he was seven, his mother changed his given name from Xinkai to Shengjie, having sought advice from her church leaders. Shengjie means ‘holy and pure’ and is a term which appears frequently in the biblical text. Her prayer was that Shengjie would be a ‘clean person’ (ganjing de ren). Beyond the literal meaning is the idea that when something is pure and holy, it is ‘separated’ (fenli) for God’s use. The change in name was a clear signal that Shengjie’s mother now had a love for God which superseded her patriotism, although she insists that she is still patriotic and is a better citizen now than she was before becoming a Christian. As a preacher, Shengjie is now an embodiment of his mother’s aspiration (and prayer) that he would contribute to the building of the church. According to Shengjie, when he was young, he didn’t really understand the meaning of his name. Now, in his thirties, he sees the ‘deep spiritual meaning in his name’ (tai da de shuling de hanyi zai qizhong). His name, he believes, is something which he needs to follow, and has a real impact on his life as a ‘binding force’ (yueshu li).

The significance of names in the Chinese context

Broadly speaking, personal names in Chinese societies have much more social and political significance than in Western societies. In contemporary China, it is common for people to have two names, and not uncommon for people to have multiple names, with each name signalling something about the holder’s position within a given social setting. Shortly after birth, many children are given a ‘milk name’ (ruming, aka ‘small name’ xiaoming), generally used by family members and close friends, and a formal-legal name (xingming, aka ‘big name’ daming), registered with the state. Nicknames, ‘online’ or ‘cyber’ names, and ‘English’ names are also common, but we won’t consider these here. Formal-legal names (and milk names to some extent) are particularly important because they typically belong to the bearer for life. Parents and family elders often consider in depth the meaning, sound, and form of the characters when naming a child. There has been something of a revival in recent years of geomancers and professional name-givers being consulted.

Protestant Christianity is the fastest-growing religion in the People’s Republic of China, with adherents numbering an estimated 70 million (Stark & Liu 2011). However, despite Protestant Christianity’s remarkable growth, the everyday lived religion of Christian adherents is under-researched. I have been conducting ethnographic research in a group of Three-Self-affiliated churches (which are registered with the state) in a coastal city in northern China for the past decade in order to further understand the everyday lives of Chinese Protestant Christians. [1] I am currently examining formal-legal and milk names in this Three-self-affiliated Christian community. [2] 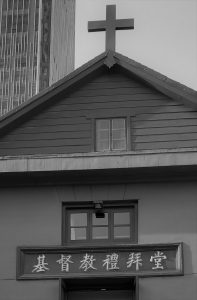 Many of my research participants who are Protestant adherents have names which are recognisably ‘Christian’, and these can be divided into different name-types. The three main name-types are names composed of Christian concepts such as ‘grace’ or ‘holiness,’ eg, Qi’en or Shengmin; names borrowed from the biblical narrative such as ‘Joseph’ (Yuese) or ‘John’ (Yuehan); and names made of a combination of characters which represent a verse from the biblical narrative, eg, ‘Manna’ (Mana) from Exodus 16:31. It is common for Christians to explain their given names when they meet new people or for parents to explain their child’s Christian-themed name to others, revealing that these names are much more than a personal label.

Born in the 1980s, Zheng Shengjie was one of the first to receive a Protestant name in his church community. Having experienced the excesses of the Cultural Revolution era, many Christian parents in Huanghaicheng in the 1980s and early 1990s were reluctant to choose overtly religious names for their children because they ‘did not have a sense of security’ (meiyou anquangan). Now, however, it is much more common for people who have grown up in these church communities to have a clearly-defined Protestant name.

The power of Protestant names

As was the case with Shengjie, church leaders play a central role in the naming process and some are regarded as such adept name-givers that they are approached by people from outside of the church to name children. I have examined in some detail in previous research the role of the Holy Spirit in Huanghaicheng congregations (McLeister 2019). Some church leaders I interviewed believe that the Holy Spirit gives names to children through them. All name-givers in the churches spend time reading the Bible and praying before making a final decision on a name. The Holy Spirit gives them ‘an insight’ (yi ge kanjian) or ‘moves’ (gandong) them so they choose an appropriate name. Many Christians in this community believe that the ability to bestow names on children is a special spiritual gift (teshu de enci).

Some parents believe that the names given by church leaders are more ‘effective’ (youxiao) than names which lay Christians choose themselves. Just as Shengjie believes that his name has an impact on his life, many Christian parents believe that a Protestant name can have a powerful positive influence on the behaviour of their child, and the name will serve to guide the bearer through their life. Some parents talked to me about their child’s name as a ‘reminder’ (tixing) of the Christian message. Sometimes, when calling their child’s name, these parents explained that they would reflect on the idea that God had bestowed the name on the child and that the child would one day learn about the fuller and deeper meaning behind it.

From this brief overview, we can see some aspects of the power of Protestant names in this Christian community. In seeking such names for their child, Christian parents are making a conscious choice about their religious identity and their aspirations for their child. As bearers of parental aspirations, the names protect and guide the child. As markers of a shared religious identity, the names help to foster community ties.

Mark McLeister is Lecturer in Chinese Studies at the University of Edinburgh. His research focuses on the ethnography of Christianity in China. He is currently working on two projects: 1) an ethnographic study of Protestant Christian names in China, funded by the Carnegie Trust; 2) an ethnography of church festivals in urban China. Mark’s recent publications include an analysis of religious authority in Protestant congregations (Asian Ethnology) and a study of the beliefs and practices of a Deaf congregation (Studies in World Christianity). Image credit: author.