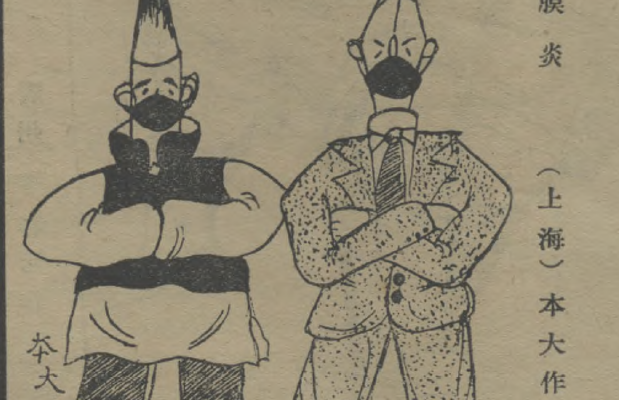 Since the beginning of the Covid-19 outbreak, peoples’ massive recourse to face mask in Eastern Asia, and in China specifically, has led to a widespread belief in a so-called Asian “face mask culture”, regularly opposed to what is considered a more stigmatising approach to face masks in Western countries. However, this opposition neglects to take into account the historical processes leading to the widespread use of face masks in China. Focusing on photographs, pictures and comic strips featuring face masks, dating from the beginning of the twentieth century to the end of the Maoist period, this text offers a modest glimpse into the cumulated layers of meanings which have historically been attributed to face masks and to their representations in recent Chinese history.

The birth of mask-wearing in China is linked to both pandemic and visual history. The plague which hit Manchuria in 1910, killing around 60 000 people, is often considered a historical starting point. Wu Liande – a Cambridge educated Malaysian Chinese physician who had undertaken bacteriological studies in Liverpool, Paris and Kuala Lumpur before becoming the vice-director of the Imperial Army Medical College in Tientsin – was sent to Harbin by the Manchu Imperial Government to tackle the epidemic. 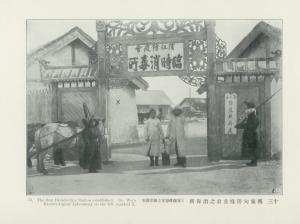 In the midst of Chinese, Japanese and Russian imperial conflicts, Wu distinguished himself by his novel theory on the airborne transmission of the disease, but also by his inventive anti-epidemic methods, including the cremation of bodies, the quarantining of contacts, and most notably the use of “anti-plague masks”. Indeed, while Wu might have seen face-protecting devices during his time in Europe, they were still far from being widespread as physicians only started to recommend them for medical purposes in the late 19th century. By contrast, Wu’s masks were more substantial: consisting of two layers of gauze and absorbent cotton as well as a tying process which allowed to keep the mask in place during operations in Manchurian cold winters, they could be easily made from relatively cheap material. 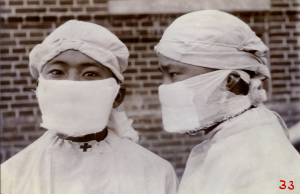 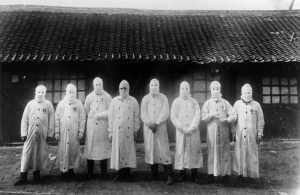 According to Christos Lynteris, the numerous photographs available of the epidemic, which included many portraits of people wearing masks, ought to be contextualised in the geopolitical stakes surrounding the halting of the plague. Compiled in a photo album which was presented by Wu at the 1911 International Plague Conference in Mukden, these photographs worked as an implicit testimony of Chinese sovereignty in Manchuria. For Lynteris, the spectacle of the imperial white-clad hygienic army contrasted with the photos of migrant “coolies” from Shandong which Wu considered responsible for the transmission of the plague. The visual contrast therefore worked as a display of the Chinese empire’s civilising and modern ambitions, and absolved its ruling-class from any responsibility in the spread of the epidemic. 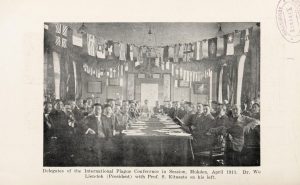 While Wu’s masks gained international praise and were used in different parts of the world during the 1918 influenza pandemic, one has to wait until the cerebrospinal meningitis epidemic which hit Shanghai in 1929 to see face masks reappear in Chinese publications. The 1920s and 1930s indeed saw a surge of epidemics throughout China, and Shanghai alone had to face 12 cholera waves between 1912 and 1948. The Shanghai Special City Government established in 1927 by the Nationalists therefore undertook public health measures, encouraging mask wearing during epidemics by the population but also among the personnel charged with epidemic prevention and port-health services. A moral subtext was also added to mask-wearing, as the New Life Movement linked the resurrection of traditional Chinese morality to the achievement of “cleanliness” and modern hygienic behaviours. In Shanghai, Hankow and Canton, for example, New Life Promotion Committees and Municipal Health Bureaus made masks wearing compulsory for all barbers.

A: Meningitis is very contagious, why aren’t you wearing a mask? B: Seeing you wearing one makes me feel reassured, I know you won’t contaminate me”, Shanghai Manhua, 1929, vol. 53, p.4. 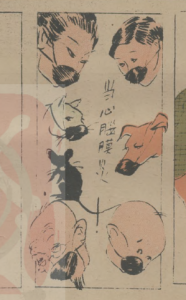 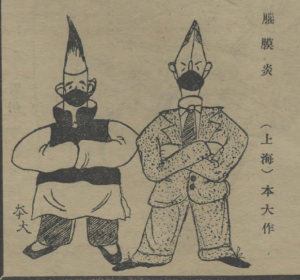 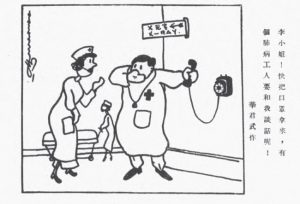 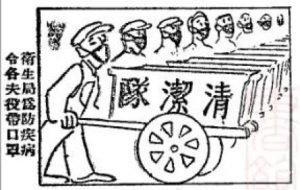 “In order to prevent diseases, the Health department orders all coolies to wear a mask”. Source : Source. 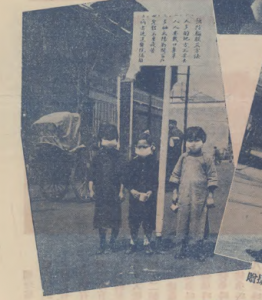 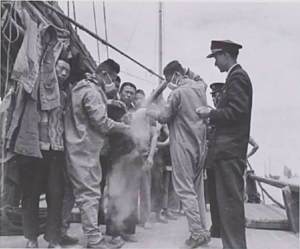 This led to an increased representations of individuals masked for hygiene purposes in the press throughout the 1930s and 1940s. Huang Wei indicates that masks were mostly made of black cloth (not unlike the ones promoted today by Korean pop-stars) : however, people were reluctant to wear them, even jokingly calling those wearing black masks “foreign concession dogs” – a reference to the increasing use of muzzles for dogs to prevent rabies. Journals therefore tried to promote them as a fashionable device distinguishing those who “understood hygiene”. While some periodicals taught women to knit woollen masks for cold winters, others started imagining fashionable masks made of silk or leathers, coloured in white, cream or pink, or even with a nose and mouth drawn upon them. 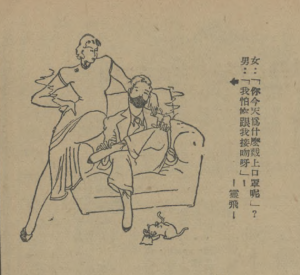 “Woman : Dear, why are you wearing a mask today? Is it for epidemic prevention? Man : No, I am afraid you might want to kiss me too often”, Sanliujiu huabao, 1942. 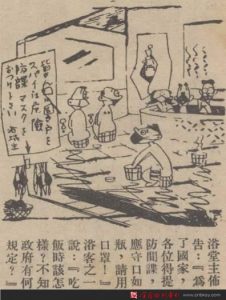 “The public bathhouse announces: ‘For the country, everyone should watch for spies and guard their mouth like a closed bottle, so please wear a mask!’ A client says : ‘How about when we eat? Shouldn’t the government have a regulation for that?’”, Renshijian, 1940, vol. 11, n°16.

Simultaneously, the civil and Sino-Japanese wars led to an increased use of face masks as protection again chemicals – some being designed for soldiers and others manufactured for civilians. In 1936, the Shanghai Ming Ying Chemical Industries factory employed more than 200 workmen and had a monthly production capacity of 50,000 masks. Many periodicals also started to feature tutorials teaching people to create their own masks, while in Suzhou, women who were part of the Rear service society sewed gas masks for the troupes.

In 1937, the War Department of the Nationalist Government sent a document to multiple provinces, which explained how to fabricate a simple gauze mask and dip it in a mixture of sodium carbonate, methenamine and water to protect against chemicals. Yunnan received around 250 copies of the document and the governor had them disseminated in the province, leading 53 war factories to produce them. The provincial Construction department even invented a mask designed for mules, the animal constituting a valuable resource for transportation in war-time Yunnan. 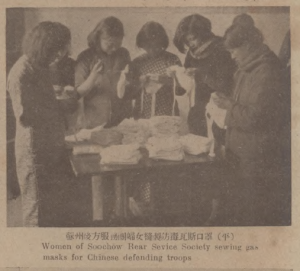 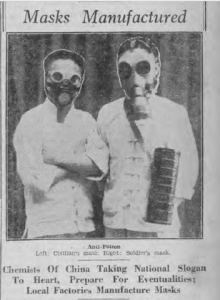 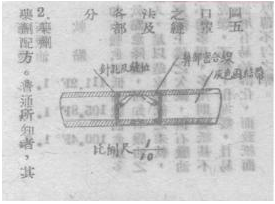 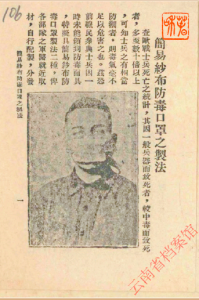 Methods for the fabrication of a simple gauze mask. Yunnan Province Archives. Source.

The Korean war played a central role in the representations of face masks during the first decade of the Maoist period. As explained by Yang Nianqun, in 1952, the Chinese and North Korean accusations of germ-warfare against the United States “were used by the CCP leadership as a catalyst to push for domestic political reform in China, in particular, to create a highly politicised ‘Patriotic Health Campaign’ (…) The Chinese charges (…) implied a double message, that is, the existence of the new China was threatened both by the American aggression and by natural bacteria” (p.156). Therefore, masks appeared regularly in propaganda posters as a metaphorical device protecting both the individual and the national body. 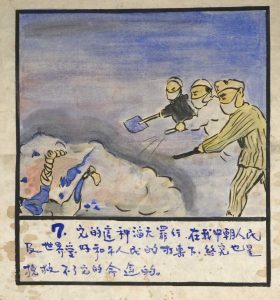 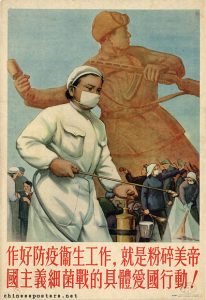 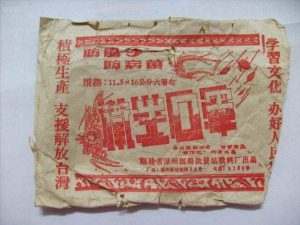 A cotton mask envelope most probably from the 1950s, made in Fujian. The envelope describes the masks as “preventing from dust and germs”. The slogans on the side read: “Actively engage in production, support the liberation of Taiwan, learn culture, establish People’s [communes?]”. Source.

The Patriotic Health Campaign as well as the 1958 Four Pests Campaign participated in the development of posters featuring masks in more mundane settings – worn by physicians or by cooks applying the new hygiene rules regulating restaurants, but also as a way to protect oneself from dust and chemicals during construction works, spring cleanings and field fumigation. 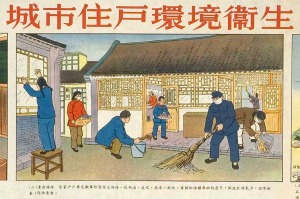 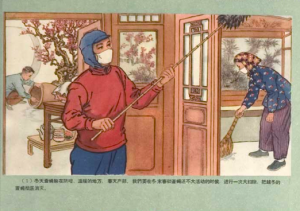 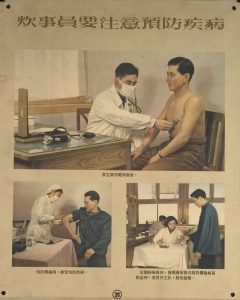 Chefs should pay attention to their health and the prevention of diseases, 1955. Chinese public health poster collection of the U.S. National Library of Medicine. Source. 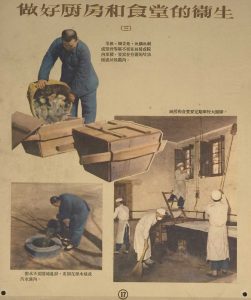 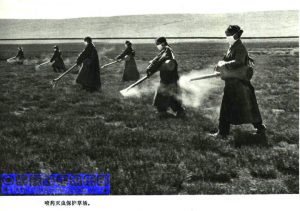 These representations seem to indicate a diversified and diffuse appropriation of masks during the Maoist period, despite the scarcity of resources. Of course, epidemics continued to play an important role, such as during the cerebrospinal meningitis epidemic of 1966-1967, which spread throughout the country along with the Red Guards’s Great Linkup, causing more than 160 000 deaths. Ian Brodie’s photographs of Red Guards wearing white cotton face masks in 1967 illustrate the seeming banalisation of the object during this epidemic. However, according to people commenting on Solange Brand or Agnes Varda’s photograph, masks were simply a way to protect oneself from dust and cold in North-East China. Others insist on the use of masks as a tool for anonymity, such as when Liu Shaoqi visited the Changjiang Bridge building site in 1953, wearing a mask to remain unrecognised during his visit. Whether the mask worn by a woman dancing at Beijing University on Marc Riboud’s 1953 photograph shows her desire for discretion, her wish to protect her face against dust, or a tool to disguise her blushing also remains open to interpretation. However, such uncertainty may also signal the diversifying meanings attributed to masks in this period. 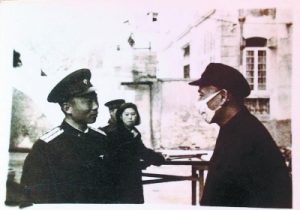 Liu Shaoqi coming for a visit of the Changjiang Bridge building site around 1953. Source. 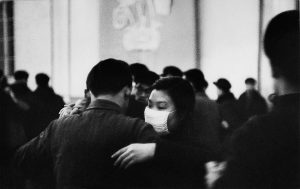 The fact that most portraits of people wearing face masks during the Maoist period seem to have been taken by Western photographers may also reflect another implicit narrative. While face masks had been punctually used in Western countries during the 1918 and 1968 flus or during the London Great Smog of 1952, they still hadn’t become regular sights. On the contrary, research has shown that representations of face-covering practices long characterised the colonial gaze on the Orient, transforming the veil as a mask and the Oriental into an enigma. Covered faces therefore bore the implicit idea of a concealed truth. The recent resurgence of this visual economy has been observed by Maria Shun Ying Sin, for whom the wearing of masks in the Western media’s coverage of the 2003 SARS epidemic was “often implicitly – and sometimes explicitly – pitted against ideas of transparency, truth, sincerity, and authenticity”. Masks became “representative of a mass, faceless society”, as exemplified in the dissemination of “dramatic photos of masked crowds walking the streets of Asian cities”. Did the portraits of masked individuals which appeared in Western photographs of China during the Maoist period initiate such a trend? One can hope that further research may enlighten us on the subject, and bring us a better understanding of the historicity of mask wearing and its representations in China.

Justine Rochot is an associate researcher at the Centre for Studies on Modern and Contemporary China (EHESS, Paris) and at the French Centre for Research on Contemporary China (Taipei). Her PhD thesis in sociology, received from the EHESS in 2019, consisted in a multi-sited ethnography of retirees’ gatherings in urban China. She is currently pursuing her research interest for the ethnography of aging and sociabilities with a project on Taiwan Presbyterian Church’s “Pine Age Universities”.