In public urban spaces, among a number of entertainment activities and exercises (e.g. running, Taiji, speed-walking, etc.), plaza dancing (广场舞 guangchangwu) stands out. Plaza dance, as a kind of collective leisure activity, is a mixture of dance and gymnastics, and incorporates a variety of dancing styles, including folk dance and pop dance. It has its roots in both yangge 秧歌, a popular folk dance said to have originated during the Song Dynasty and later incorporated into the CCP’s propaganda campaigns from the Yan’an years, and later zhongziwu 忠字舞 or ‘loyalty dance’ that was practiced to praise Chairman Mao (Chao 2017). Plaza dancing has grown in popularity since the reform era. In the run up to the Olympic Games in Beijing in 2008, the dance was widely promoted by national fitness policies from the General Administration of Sport (国家体育总局 guojia tiyu zongju), as well as the Ministry of Culture (国家文化部 guojia wenhua bu) (Fang 2015; Wang 2015).

Plaza dance is mainly practiced by dama 大妈, which literally means ‘big mama’, though is more generally translated as ‘aunt’. Dama is generally used to refer to middle-aged and older women in the PRC. Most of these dancers are retired and live in cities. In the mornings and evenings, groups of women dance in public spaces such as plazas and parks. Most of the plaza dance groups are self-organised or partly supported by local government. Recently, many TV stations have held plaza dance competitions and plaza dancing- themed TV shows. Statistics show that there are approximately 100 million plaza dancers in mainland China in 2015 (Fang, 2015).

This article is based on my three-month ethnographic research in the city of Nanjing in 2016. I joined three different plaza dance groups and did 29 in-depth interviews with female plaza dancers. Most of my interviewees were born in the 1950s and 1960s. According to my research data, there are a number of reasons behind the popularity of plaza dancing, such as its low-cost, women’s early retirement, increasing internal migration, cosmetic reasons (e.g. maintaining an ideal body shape) and medical benefits. My interviewees told me about their everyday plaza dancing stories and how regular exercises helped them ‘improve’ body shape. Many of my participants praised the flat bellies and slender waists of the plaza dance teachers in their groups. When I asked one of the women, named Han Yijun, who grew up in an upper-class family and had retired from work, whether she cared about her body shape, she replied:

Of course I do. My main reason for doing plaza dance is maintaining my body shape. I have lost one kilogram recently, and I would like to maintain my current weight. It’s raining a lot these days, and I’m a bit anxious that if I stop dancing for quite a long time owing to the weather, I will gain weight again.

Another plaza dance participant named Tian Changying, who used to work in a private company, also told me about the effectiveness of losing weight through plaza dancing: ‘Before I joined this group, I weighed 69 kg. And after dancing for half a year, I’ve gone down to 61 kg. It’s the best way to lose weight.’

Since the economic reform in the late 1980s, China’s beauty economy has been booming. There is a revival of hyper-femininity and an ‘upgrading’ from ‘ripe’ women (熟女 shunü) to ‘tender’ women (嫩女 nennü), which celebrate female youthfulness (Yang, 2011). Slenderness is closely associated with youthfulness and bodily ideal in today’s popular culture. From these plaza dancers’ narratives, we can see that these pressures to conform to mainstream beauty ideals are highly prominent in urban physical culture. 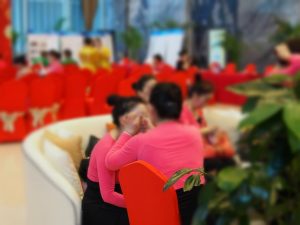 The image of damas in mainstream media is often negative; they are routinely stigmatised as overweight and unattractive (Wang, 2015). Owing to the general stereotypical assumptions of older women, some older women in my study did not want to identify themselves with the damas. I asked my respondents: ‘Do you think that you are a dama?’ Among these 29 middle-aged and older women, almost half of them said yes and half of them said no. They refused to call themselves damas because they preferred to identify themselves on the basis of their subjective mental age. Ning said:

Our group’s name is ‘Wonder Damas’, but I’m not a dama. I think I’m still young. Although I’m in my sixties, I think I’m like a 20-year-old young person. I’m as young as today’s young people. My mental age is rather young.

Likewise, Tian Changying said: ‘I don’t like people calling me dama or granny. I don’t think I am a dama, at least I’m not a dama mentally. I feel that I’m like a 40-year-old person. I’m more energetic than before.’

The rising aging population in China has been a source of concern for the state in terms of welfare and care provision (Tu, 2016; Jackson and Liu, 2017). Promoted by the government and the market economy, the notion of yangsheng 养生 (meaning ‘defensive health-keeping’, literally ‘nurturing life’) draws from Traditional Chinese Medicine. It is now appears across health education campaigns and media discourse to emphasize individual responsibility and decision-making for one’s own health (Sun, 2016). As a kind of self-care management, yangsheng has become a new norm among older Chinese people, many of whom fear becoming a burden to their children (especially those who are of single-child families owing to the one-child policy) (Liang, 2011; Tu, 2016).

In my fieldwork, through their dancing practices in the discourse of ‘defensive health-keeping’, older women are continually regulated and self-regulated in order to attain various sociocultural ideals (e.g. being healthy, independent, active, or slim). Their efforts may challenge the stereotypical (usually negative) image of older Chinese women. However, at the same time, plaza dancing and its related notions of yangsheng also further entrenches sociocultural norms around beauty, weight and ageing.

Li Sheng received her Ph.D. in Women’s Studies from the University of York, UK. She is currently a lecturer at Department of Labour and Social Security, Ginling College, Nanjing Normal University. She is working on older people’s everyday lives in urban areas. Her work and research interests have focused on older Chinese people’s (especially older women’s) leisure activities, social lives, and health-related issues. A latest publication of her research (exploring older Chinese women’s embodied practices) can be found here. Featured image shows a plaza dance show held by local government and was taken by the author.