Religion, Economy, and the Social Good: Reflections from Tibet

As China has got richer, more funds have flowed to monasteries on the Tibetan plateau. Growing interest in Tibetan Buddhism among affluent urban Chinese has been an important factor, but there has also been an upsurge in local religious giving. This has paralleled the dual processes of accelerated development and increased securitization of Tibetan areas following widespread unrest in 2008 and a subsequent series of over 150 self-immolations. In the part of northeastern Tibet (Amdo/Qinghai) where I have been working, Tibetans have poured resources – in some cases the equivalent of hundreds of thousands of pounds – into a wave of new religious construction and escalating levels of expenditure on rituals and the sponsorship of monastic events.

Supporting the monastic community and building temples and other religious structures have historically been among the most common forms of Buddhist generosity practice in Tibetan and other societies heavily influenced by Buddhism. Yet, in northeastern Tibet the dynamics and scale of these practices have been the subject of debate. It is not surprising that criticisms have been voiced by those Tibetan intellectuals critical of Buddhism or Buddhist institutions, but concerns have also circulated among monks and laypeople across social strata who have themselves participated in these practices. In exploring and thinking through the terms of these debates, I have been reflecting on what they might be able to tell us about conceptions of wealth, virtue, and the social good in Tibetan communities in China experiencing break-neck socio-economic development as well as political uncertainty.

It is clear that contemporary debates about the ethics of religious giving are enmeshed in Tibetans’ participation in and experiences of economic transition and state-led development. Over the period 2008-2015, I witnessed rapid urbanisation through conversion of land for urban development, as well as voluntary, state-sponsored and forced migration. A general increase in disposable incomes was accompanied by rising levels of consumption and a growth in highly visible wealth disparities. These transformations were reflected in practices of religious giving. For example, when the members of one village pooled over four million yuan (around £444,000) for the reconstruction of a temple in 2014, individual pledges ranged from 2,000 to 200,000 yuan (roughly £22,000). A local businessman I met in 2013 said he had readily spent roughly 280,000 yuan (over £30,000) to fund a spectacular one-day religious event for monks without needing to save or get into debt. This kind of spending power was far beyond that of most of the people I knew – not to mention myself. 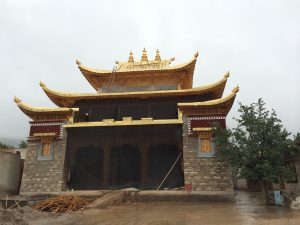 In the West – as indeed among many Chinese – Buddhism and Tibetan culture are often imagined to be other-worldly and anti-materialist, representing the antithesis of today’s ‘global’ consumer society. In reality of course, even those Tibetans who are ambivalent about marketisation and openly aware of the politics of state-led development enjoy more comfortable lifestyles and aspire to greater prosperity. This does not in itself pose any inherent contradiction with Buddhist values: wealth is positively associated with virtue in Buddhist discourse, which makes explicit a connection between virtuous action (like generosity) and wealth, status, and personal efficacy and power. Nevertheless, this has all sat uneasily with a popular feeling that an increasing economic-mindedness and a weakening of faith and virtue are undermining the very grounds of Tibetan communal well-being, morality, and identity.

On the one hand, people are concerned that contemporary practices of religious giving reflect and exacerbate this broader shift in minds and values. The cynical view is that a lot of giving is primarily prestige-oriented and motivated by competitiveness or social pressure. As such it risks contributing to community breakdown, as well as creating difficulties for households that struggle to keep up with escalating expectations. On the other hand, these are clearly moral practices. As I have dug deeper into the histories and affective dynamics of specific cases, I have started to glimpse a more complex picture in which practices of religious giving are experienced and received as (sometimes exemplary) practices of and expressions of faith and virtue. It is precisely from this – as well as from the flashing of cash – that prestige is derived. But can we go as far as saying that the dynamics and scale of contemporary religious giving is (sometimes?) oriented towards countering the very societal shift in values for which it is being critiqued?

This would certainly seem to fit with observations made by other scholars about the ethics of an emergent ‘Tibetan’ entrepreneurialism: ideally, profits from business should be used for the benefit of both self and others (contrary to Christian notions of charity, self- and other-interest are not dichotomous in Buddhism). But the debates circulating in relation to religious giving take us further, showing what seem to be (newly emerging?) faultlines in ideas about how that ideal should be realised. Leaving to one side the question of mind and motivation, a key area of contention concerns what people should do with new-found wealth. Is it better to build a temple or to give money to monks? Or should people instead fund hospitals, local education, or vocational training? What makes someone an exemplary Tibetan and a good Buddhist – and what brings the greatest benefits and best serves the social good? 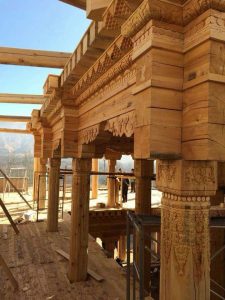 The recent controversy prompted by the outpouring of donations for the reconstruction of Notre Dame Cathedral indicates that such questions about religion, economy, and value are of global relevance. They are imbricated in a politics of value and can provoke strong moral-emotional responses grounded in common sense understandings of benefit, virtue, and the social good. Many commentators were outraged that a burning cathedral in Paris prompted people to give a total of nearly one billion euros in days when systemic poverty in France was not being addressed, black churches were being burnt down in racist attacks in the US, the planet was facing extinction… and the list goes on.

It might seem obvious to a tertiary-educated Tibetan schoolteacher that spending hundreds of thousands of yuan to sponsor a one-day religious festival for monks is excessive and wasteful. How could this possibly compete with the good of giving compassionate aid to poor neighbours or school students? But for his brother it might be equally self-evident that sponsoring such a festival is the most virtuous way to spend his money – or that rebuilding the village temple is of greater collective benefit than spending money on education. These divergent ideas about benefit and the social good can tell us something about the different ways in which Buddhism has been mediating people’s engagements with accelerated development – as well as the different ways in which Buddhism and Buddhist values are understood, felt, and engaged with in contemporary Tibet.

Jane Caple has pursued her research interests in religion, economy, and morality through ethnographic fieldwork on the northeastern edge of the Tibetan plateau. She is author of Morality and Monastic Revival in Post-Mao Tibet (Hawaii UP, 2019) and is currently writing a monograph based on her Marie S. Curie project “Wealth, Virtue and Social Justice in Contemporary Tibet,” hosted by the Centre for Contemporary Buddhist Studies (CCBS), University of Copenhagen (2017-2019). This project has received funding from the European Union’s Horizon 2020 research and innovation programme under the Marie Sklodowska-Curie grant agreement No. 747673. She gained her PhD at the University of Leeds (2011), held a Leverhulme Early Career Fellowship at the University of Manchester (2012-2015) and a Marie S. Curie Fellowship at the University of Copenhagen (2017-2019), and is currently an independent scholar affiliated to CCBS. Image credit: author.