Conference Report: Remapping the Cultural and Linguistic Landscape of the Chinese in Britain

Questioning the foundation of socially focused research is a key part of academic training, and over the years many questions have been raised as to what the contribution of those working in this space should be. For me whilst the development of methods, theories, and debates have all been important, documenting and acknowledging human experiences is most central.

It was therefore a pleasure to attend Remapping the cultural and linguistic landscape of the Chinese in Britain, a conference focusing on British Chinese experiences, which recently took place at the University of Westminster, During my own PhD work I conducted an in-depth look at the existing literature on British Chinese people, adding to this by situating the experiences of young British Chinese in North East England amongst existing studies. Having listened to the strong set of speakers at the conference this topic of study continues to expand, and I think usefully retains a strong connection to the ambiguity and shifting nature of British Chinese people as a group. Attendees should be encouraged by ongoing questioning of the term ‘British Chinese’ and should continue to explore this terrain through space, place, and, time.

Several of the speakers referenced the spaces in which British Chineseness could be identified. When I looked at this area, Chinatown, and Chinese school both featured strongly.

Chinatown was explored here as a space that advertised itself as Chinese, and yet on closer examination was nothing of the sort; symbols such as dragons or lion dogs being placed in the wrong way, arches draped in the wrong characters, too many tourists. There was reference to Chinatown London in particular as a kind of living museum, but lacking the well curated exhibits we might expect. Chinese lives were not celebrated here in their multifaceted nature, nor were the many generations and backgrounds that had worked here from sailors, laundrymen, and chefs present. There was comparison made to Chinatown Vancouver and also Washington DC, these being quite different from London’s Chinatown.

I recognised much of the discussion of space related to British Chinese identity here, in particular the search for a real or authentic Chinese representation. Indeed, for some, Chinatown represents most starkly the absence of such acknowledgment, with its focus on food and tourists, and as a commercial space. On the other hand, I think the speakers could be mindful of how their own work is reclaiming Chinatown and perhaps demonstrating how, through history tours, or discussions over personal objects, Chinatown can be returned to being a more human place. This is surely worthy work and perhaps contains an element of hope that not all such experiences are indelibly lost. 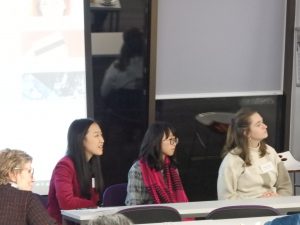 Chinese schools featured in the event with an exploration of the politics and reasons for Mandarin increasingly becoming popular for children. Chinese schools were shown to be widening their intake beyond the Chinese community, and adapting therefore to both changes in the background of Chinese migration to the UK in recent years, as well as an increase in desire for people to learn Mandarin Chinese. Internal disagreements within the Chinese community about which language to teach – Cantonese or Mandarin – also reflected the changing nature of Chinese migration, a move away from Hong Kong perhaps to mainland China, alongside a changing desire for Mandarin to be taught for professional, as well as cultural, reasons by more middle class and wealthier parents. For me this evoked concern about how we are to move forward as a community when we cannot agree which language to speak. Is there no place for both? I saw a week later that a writer in Canada was also concerned about the loss of Cantonese, demonstrating international interest in this debate.

The concept of place was broadened out in the keynote speech which talked of Chinese London, exploring the many international connections and flows of both people and money from China that are now playing a part in the shaping of the city. A reversal of fortune was documented in which a once poor migrant group, which worked laundries and then restaurants, is now associated with international finance, modernity, and development.

The concept of place is important to human geographers. It can be seen as the social energy that transforms the flat notion of space and ‘area’ into the emotionally leaden and meaningful locations in which humans reside.

At this conference language was one aspect of place explored in a keynote by professor Li Wei. Professor Wei has been working on the development of Chinese language in Britain for some time and he has explored how Chinese language operates as a key part of identity for migrants to the UK. It can initially mark them out as different and then become an issue for later generations in as a ‘heritage’ or second language. This leads to the interesting academic study of the ways in which language and identity mix. 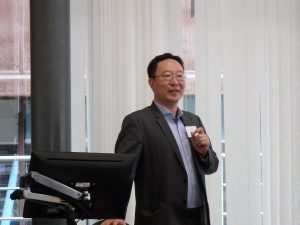 The questioning of place is a part of everyday lived experience and British Chinese are no exception here, though historically these opinions have often gone unrecorded. In response Diana Yeh has been noting the ongoing discussions on identity, led through a political awakening amongst playwrights and acting groups in London. In recent years, there has been more activism and challenges to existing institutions, such as the Royal Shakespeare Company and their casting choices for ethnic minority roles, as well as a desire for more diverse and interesting character parts to be offered and cast for Chinese and South East Asians. This is certainly a timely debate to follow, challenging the previously accepted knowledge that British Chinese are a well integrated and notably silent minority, with few political aspirations.

A key theme from the talks was that change in the British Chinese community has always been important. There have always been different waves of Chinese migration to Britain, each framed within a particular set of events and bringing a variety of different identifications, hopes, and dreams here.

We heard for example about the work Denise Kwan and Vanessa Yim have been doing to uncover the memories and experiences of older Chinese people to the UK. This work evidently can be contrasted with migrants that came in the 1900s as sailors, and now as students and professionals. It is important to document these shifts in experience not only for academic understandings, but so we can banish the idea of a homogeneous group of faceless migrants. A lack of interest has previously allowed sweeping generalisations, applied not only to Chinese in Britain but other ethnic groups as well. Indeed in the closing comments of the conference Professor Harriet Evans summed up accurately the difficulties of trying to express and capture what ‘Chineseness’ is, she questioned overall on what basis we should continue to search for meaning of this term, and how it applies to people. 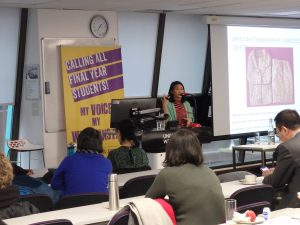 We would all do well to take note of these ever-changing sets of experiences and do our best as a research community to respect and seek them out, much as the many contributors to the conference have done.

Alexander Tan completed his PhD on British Chinese Youth Transitions at Newcastle University in 2013. He is a Human Geographer by training, seeking to humanise and document issues of British Chinese youth identity and ethnicity. Following graduation he has worked within the commercial, charity, and local government sectors; applying research skills for business, and within the community. Dr Tan continues to follow ongoing discussions about British Chinese identity.