The ‘Affective Plague’: WeChat Groupchat as an Epidemiological Space

This essay is primarily concerned with WeChat groupchats as an epidemiological space. As a backdrop to this discussion, we must start with the statement that WeChat is not a platform of preference in China but one of necessity. Not installing WeChat is not simply social suicide—for some, a digitally reclusive lifestyle can be even more desirable—but it comes with harsh inconveniences that can literally immobilise. For instance, in the new regime of contact-tracing ‘health code’ infrastructure, in many locations you are only given the choice to scan the code with your WeChat, otherwise you cannot get on the bus/train, enter the mall or wet market, nor board your flight. If you are without your Wechat-installed smartphone, your mobility is immediately brought to a halt, which was indeed the case for many elderly people. WeChat is ‘super sticky; because of its convenient ‘mega-platform’ that is a ‘one-stop gateway to more than twenty functions’ (Chen, Mao, and Qiu 2018, 8-9); however, the other interpretation of this super-stickiness is that you are stuck with it, happily or not.

WeChat can be a chore but I am not going through all the socio-technicities of those chores here. Instead, I will focus on one aspect of it, perhaps the most relatable to those who live outside the WeChat regime. WeChat groupchats as social designations are bound to have inclusions and exclusions. Some are more intimate like small groups of friends, family, or colleagues, while others are massive anonymous groups made for arbitrary and ephemeral reasons that range from sharing memes among strangers, maintaining hobby activities, to facilitating group-buying vegetables. The messiness of groupchats became glaringly clear during the lockdown as WeChat groupchats became the sole infrastructure for organising, purchasing, and distributing grocery supplies within local communities; and sharing crucial real-time information about new lockdown measures or which hospitals have available beds, all of which are necessary for survival. These groupchats also accelerated into an emotionally pulverizing whirlpool of extreme affects: anxiety, fear, anger, lethargy, and so forth. All active groupchats, no matter large or small, intimate or anonymous, became a live field site (if not a laboratory) of social-viral-technical epidemiology. But do not expect an exposition from such a short essay; I can only sketch some ideas and my current ongoing research.

While most Wuhan residents were at home, the aforementioned affective projectiles, often inflected with the circulation of short videos depicting whatever was going on the streets and in the hospitals, penetrated (and spreading across) WeChat groups of all kinds—from the most established connections of family and close friends to the most transient groups that you forgot you were part of. I will spare the readers the details of the potentially traumatising videos and many chatlogs that followed them (to give one prominent example that went viral, a Wuhanese woman threw a tantrum and condemned the supermarket food delivery for its bundled sale of rice and toilet paper/soy sauce in a WeChat groupchat). Indeed, many informants, when reflecting upon the intense affects a year on, still felt reluctant if not outrightly avoiding recollection.

Luo Yu from New Weekly published an article named ‘In the Face of a Storm, Do Not Infect Yourself with the ‘Affective Plague’’ on 31 Jan 2020 (a week into the Wuhan lockdown). The article blames doomscrolling social media (especially WeChat, as groupchat notifications are mostly muted anyway so they were often consumed much like a timeline) for spreading various ugly affects such as anger and anxiety, and suggests digital detox to offset the burden of information overload and abundance of idling time at home. He writes:

Anxiety is passed around, infecting the credibility of constantly spreading and ‘confirmed’ rumours…information overload leads to…[unconstrained] ‘excessive sympathy’ (translation is my own).

Affects (including ‘excessive sympathy’) are seen as corrosive forces, against not just social unity but also the individual immune system. The whole resurgence of technophobic discourse (previously evidenced by campaigns against internet addiction) is best encapsulated under the banner ‘the harm of smartphones is worse than coronavirus’ (手机之害甚于新冠病毒 shouji zhihai shenyu xinguan) (Fig. 1). 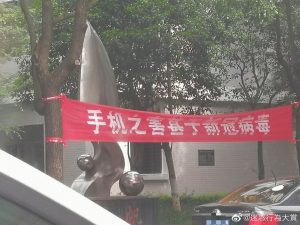 The diagnosis for 手机病 shoujibing or the smartphone malaise, has been made, and the prescription has been given—look at your phone less. I would argue digital detox has not worked as intended (during normal times, let alone during a pandemic) as the alternative is not actually that appealing. One informant (a 65-year-old Wuhan resident) responded to my question on digital detox and smartphone use during the lockdown, as follows:

To be honest, smartphone was my lifeline in isolation—I cycled through different things to do on the phone, singing Karaoke, watching Tiktok…I even earnt some cash by completing the daily quests on those apps (specific versions of Tiktok reward viewers with points for watching ads in between videos, which can be then accumulated and exchanged for cash) …The problem, or rather how I rid myself of troubles, was talking to/socialising with people on WeChat. Don’t get me wrong I talk to people face-to-face all the time [during normal circumstances]. By keeping the social to the minimal on WeChat—I still checked on friends and family’s health—I was able to avoid all the emotional stuff you mentioned, even with my own daughter…The problem is really WeChat…or putting too much energy into trying to maintain connections via WeChat [groups].

If groupchat was the poison, was the remedy Tiktok? Smartphone seems to both torture and save us at the same time.

After I finally left Wuhan in July 2020, Tony D Sampson updated his theory on social media and virality during the Covid crisis: ‘virality is resolutely non-metaphorical’. While repurposing Gabriel Tarde’s theory of social contagion and positing a very aptly placed critique of Le Bon’s The Crowd (1995), Sampson’s 2012 book seems to pre-empt any further discussions by Chinese public intellectuals using Le Bon to criticise mass hallucination during image-events—during the Wuhan lockdown, Le Bon was again evoked as the prophet who predicted the fragility of mass affects. If Le Bon represented ‘an aristocratic expression of fear against the rise of democratic movements in the nineteenth century’ (Sampson 2012, 83), the numerous quotations and evocations of Le Bon in contemporary China point to its own intellectuals’ deep-rooted fear or distrust of the crowd (in an epidemiological setting, let alone in the context of social movements).

What I can only suggest, following Sampson, is an epidemiological space where biological contagion, thought/affect contagion, digital infrastructure, local lockdown mapping, tracing the infected, tracing the affected can all be stacked in a new cartographic system. Instead of reducing social relations to the same system of metaphors—whether it is the blackhole-ish nullified masses (from the cynical eye) or the presupposed Hope of a unified people (in a celebratory tone)—our experiences during the Wuhan lockdown undoubtedly testified to the ‘tensions between attractor and attracted in processes of magnetization’ (91) that Tarde highlighted. A viral video of a hellish scene in a hospital did not just trigger fear and panic, but instead impulsive outbursts of emojis, 表情包 biaoqingbao, debates, ‘Wuhan add oil’, and other kinds of diversions, all of which ‘persist beyond the saying that they fall under the magnetic influence of hypnotic images’ (85).

Dino Ge Zhang is a media anthropologist and co-editor of the book (Un)Locked: Memories of Wuhan.