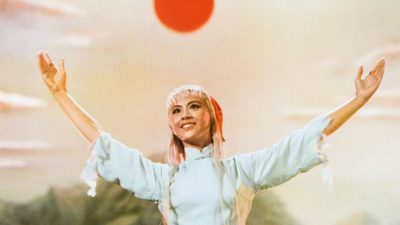 In the Arts and Entertainment section of our collection, I constantly came across these posters of “The White-Haired Girl”, a tale goes way back in China. The story is originated from legends circulating in the border region of China’s northern provinces in early 1900s. It was later adapted into a musical play in 1945, when World War II was coming to an end. Artists from the Lu Xun Art Academy in Yan’an (the ‘red capital’ of China’s Communist Party before 1949 ) transformed the folklore into a story with political overtone added in, and composed the first screenplay of The White-Haired Girl.

The White-Haired Girl tells a story of the peasant girl Xi’er, daughter to Yang Bailao, a tenant farmer who owned a large amount of debt to the despotic landlord Huang Shiren. On the eve of Chinese New Year, Huang forced Yang to give away Xi’er to be his concubine, as repayment of Yang’s debt. Yang was shot to death during the fight and Xi’er was taken away. Dachun, a young famer in the village, was in love with Xi’er. He tried to rescue her but failed. Xi’er couldn’t endure the slavery treatment in Huang’s household and managed to run away. She escaped to the mountains and lived in a cave for the following years. She had to gather offerings for food from a nearby temple and fought with attacking beasts in the jungle. Her hair gradually turned white during those days away from civilisation. In the meantime, Dachun joined the Communist Red Army and fought in the Japanese invasion. He returned to the village when the war was over, and finally found Xi’er in the cave, rejoiced the girl with long white hair.

The play became extremely popular across the country, especially among the Communist “Liberated Zones” during the civil war (1945-1949). It’s hard not to – excluding the political propaganda elements, “The White-Haired Girl” has all things general public enjoys as an art piece: revenge, romance, fantasy – we can totally make a Hollywood-like blockbuster out of it (with 3D effects).  The White-Haired Girl movie did come out in 1950, directed by Shui Hua and Wang Bin, starring Tian Hua (as Xi’er), its first- run attracted more than 80 million audiences in Shanghai (a blockbuster indeed). The White-Haired Girl movie caused a national effect in post war China, almost every single person knows the tune of the theme song “The Blowing North Wind” at that time. It was Tian Hua’s first big screen experience, she made an impression and became the face of Xi’er.

Tian Hua as Xi’er in The White-Haired Girl Movie, 1963

I am more fascinated by the other art form The White-Haired Girl was adapted into – a ballet show. Early Chinese ballet was mostly influenced and trained in Russian style, Tchaikovsky’s Swan Lake and several other classics were brought to the stage in the 50s. And, like many other interesting facts in modern China, the first two original Chinese ballets were created under the purpose of communist propaganda – The White-Haired Girl was one of them. Cheng DaiHui, one of the original choreographers, remembers the excitement they felt when being assigned the task. The show premiered in 1964. “Chairman Mao praised after watching it.” Cheng said. Lin YangYang, another choreographer, says the show was breaking creative boundaries, blending popular music and traditional folk dance into the ballet, and was largely referenced by later Chinese ballet productions. During the art and literature restricted period of Cultural Revolution (1966-1976), only eight model plays were permitted to be showed to the public, including The White-Haired Girl ballet. In that long and winding 10 year’s time,  The White-Haired Girl was one of the very few entertainments in China, it became a collective memory for a whole generation.

Posters of ‘The White-Haired Girl’ Ballet, 1972

The White-Haired Girl was, and always will be an unique existence in China’s art and entertainment history. It’s an art piece only able to be produced in that specific historical spot. Some creative talents that involved in the production of the film and the ballet have already passed away, they contributed a great deal into this piece of collective intelligence, and created a generational memory. I still remember going to an exhibition of propaganda art in the British Library in 2013, and spotted a poster from the The White-Haired Girl ballet. I put on the head phone placing next to the display, and the tune of “The Blowing North Wind” came out, across half of a century’s time, stroke into my ears.