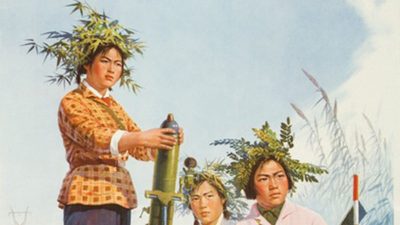 As a research student often looking at feminist movement and theories, I am quite familiar with its history  in the modern western world. But what about  China? What happened to women’s rights in China back in the day, especially when they were probably facing more challenges than their western comrades, due to war, poverty and suppressing feudalist values?

I found some clues in the poster collection – there were images of women carrying artillery troops and machine guns, women portrayed as factory workers and engineers, they were the so-called “Iron Girls” in the first few decades of Communist China (50s – 80s), and largely appeared in propaganda campaigns. These tough-and-masculine-women portrayals remind me of the famous American wartime poster “We Can Do It!”, both similarly served the purpose of lifting national spirit and boosting worker morale.

Raising women’s right was a significant theme of the revolutionary propaganda in China from the 1950s to the 1970s. Attempting to achieve gender equality is considered as one of the least controversial legacies of Mao ZeDong. As an inspiration, his celebrated quote “women hold up half the sky” was widely promoted across the country. Rumour says the statement was made to respond an article published on a local Women’s Federation Magazine in Gui Zhou province in 1955. As women has become a valuable work force in China’s rapid industrialisation development, the article proposed equal pay for equal work between men and women. Interestingly, at the same time, the second-wave feminist movement was taking place across the pacific ocean, and the feminist symbolism in “women hold up half the sky” even received affirmation from western left-wing intellectuals. “Women Hold Up Half the Sky, the Face of Nature is Transforming”, 1975

As part of the revolutionary movement, policies and laws were made to protect women’s right in marriage and education. In 1950, the New Marriage Law (also known as the First Marriage Law) was passed in China. It radically changed the existing patriarchal marriage traditions, such as arranged and forced marriage, concubinage and prohibition for women to seek divorce. Nevertheless, the gender gap for primary and secondary education was decreasing at the time, and women were encouraged to strive for more educational opportunities.

Enough of the boring historical facts,  how is the women’s liberation movement actually influences each individual in China? I’m trying to compare the life status between three generations of women in my family here, for some possible evidences.

Starting by my beloved grandmothers – Grandma Liang, from my father’s side, arranged to marry her husband, fought in the civil war, and was offered an official’s position in the local government when the war ends. She had to turn down the offer as she was never properly educated and was unable to read. She doesn’t know how to speak Chinese mandarin (the official language) and I can only communicate with her in dialectic Cantonese. The furthest place she ever travelled to in her life is the capital city of our province. Grandma Chen, from my mother’s side, arranged to marry her husband, and didn’t even know what he looked like until the wedding night. After the establishment of Communist China, she attended night schools and learned how to read and write, she was already a mother to four children by then. She enjoyed reading newspapers, watching sports and loved to criticise my taste in fashion. Luckily, both of my grand mothers escaped the suffering of feet binding (Chinese custom of applying painfully tight binding to the feet of young girls to prevent further growth).

Coming to my mother, growing up during the 10-year Cultural Revolution (a national movement to preserve “true” Communist ideology by purging remnants of capitalism and traditional elements in Chinese society from 1966-1976), she was influenced by its aftermath and joined the army at the age of 18. She served in the air force for five years and was trained in radio operating. After discharging her military service, she was assigned to become a librarian. She had a monthly library budget and was able to purchase a large amount of western literatures. She enjoys Agatha Christie more than Conan Doyle. She later attended the reformed Adult University Entrance Exam and received a degree in Philosophy. She met her husband through her flatmate in university. After graduation, she started to work for a department in the local government. She was responsible for dealing with issues  relevant to labour, youth and women’s rights. She considers herself having a greater career achievement than most women in her generation and now happily retired. Her current hobby is travelling, she just returned from Russia, and planning to go to Australia and New Zealand next month.

And then it’s me, from the youngest generation of the family, attended primary and secondary schools under the policy of 9-Year-Compulsory Education in China, and developed a personal interest in music and film during my teenage days. I was super into British indie bands in high school and wrote a few reviews for a music magazine. At the age of 18, I came to the UK for university, film studies and related subjects have been my major all along. I am able to form a lot of international friendships and enjoy the multi-cultural scene in London a lot. I tried to learn German for a while but failed, then I figured English is quite enough for a second language, at least for now.

“Free from Tedious Domestic Chores, Devote Yourself into Socialism Construction “, 1960

It is fascinating to see how things have changed for women in China (or at least for those ones in my family) over the last 100 years. My mum still talks about the liberatory movement for women as if it’s one of her fondest memories, even though she also admits women in China have to suffer a double burden, as they are still expected to handle domestic chores while preforming to the same professional standards as men in their work place. The idealism behind “Women Hold Up Half the Sky” may seem a bit redundant at this post-feminist era, however, it cannot be denied, the social development behind such ideology did radically improve the status of women in modern China. There is still a long way to go, but, one step at a time.