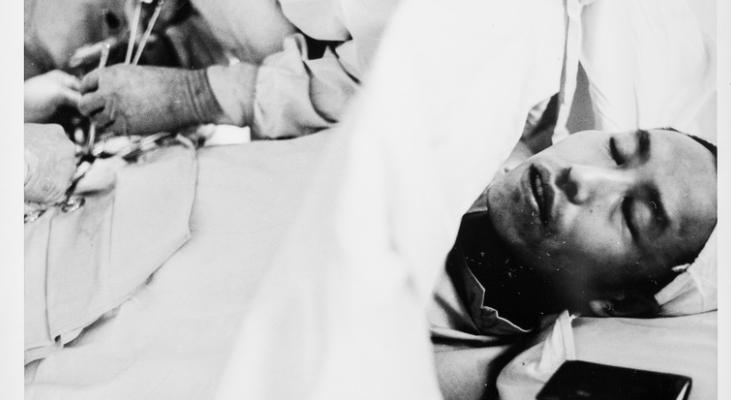 In the early days of the Covid-19 outbreak, the Chinese government sent hundreds of thousands of care packages to students studying overseas. Stuffed with packets of herbal capsules, face masks, and disinfectant wipes, the unexpected gifts were a thinly-disguised attempt to conjure nationalist sentiment in the wake of rising racism abroad. ‘The motherland is by your side,’ the care packages boasted, pointedly reminding students that their time spent overseas would never diminish the blood ties they maintained to their ancestral homeland.

The Covid pandemic was not the first time the Chinese government sought to use medicine for nationalist ends. As historians have long pointed out, medicine in China has frequently stood as a symbol of the nation writ large, and the adoption of different medical modalities has accompanied the waxing and waning of subsequent political regimes. Throughout the nineteenth century, the outbreak of epidemics, combined with the intensification of colonialism, had once marked the Qing empire as the ‘sick man of Asia’. By 1949, however, the rise to power of the Chinese Communist Party (CCP) had ushered in a new era in public health: one in which the Chinese people would overcome their past humiliations and walk on their own two legs.

Throughout the early decades of the People’s Republic of China, the CCP viewed medicine – and Chinese medicine in particular – as an alluring vehicle for the cultivation of nationalist feeling. But even more than this, Chinese medicine offered the CCP a possible diplomatic coup, a way of signaling to the Western world the creative potential of Mao Zedong Thought. If the CCP could independently devise a revolutionary form of medical treatment – one that had no antecedent within scientific biomedicine – then they could prove to the capitalist West that Chinese forms of knowledge (inspired, of course, by the theoretical innovations of Maoist doctrine) were equally, if not more, effective than those of their Western counterparts.

Perhaps the greatest feat of medical diplomacy undertaken by the CCP was the development and subsequent international promotion of a technique known as ‘acupuncture anesthesia’ (zhenci mazui 针刺麻醉). As its name suggested, acupuncture anesthesia (AA) was a procedure in which acupuncture needling would serve as a replacement for, or supplement to, conventional medicinal anesthetics. In truth, the appellation was a bit of a misnomer. Unlike pharmaceutical anesthesia, acupuncture would neither put the patient to sleep nor completely eliminate all physical sensation. Instead, AA was more of an analgesic than an anesthetic, dulling the pain of the surgical intervention while enabling the patient to remain aware of, and responsive to, the manipulations of her body.

For the communists, AA represented the fullest embodiment of Maoist medicine. It was inspired by indigenous forms of treatment and was entirely distinct from Western modalities. At the same time, it was low-tech and did not require years of training or elite scholarly knowledge. And because patients remained conscious throughout the procedure, they could work in collaboration with their doctors to ensure the surgery’s success. In its form, function, and execution, AA served as proof that Maoist ideology was not just a vessel for innovation but, more importantly, an alternative imagining of medical modernity entirely.

The CCP lost no time in promulgating the advances of their miraculous discovery. Aware that AA was an ‘exceedingly good opportunity to propagandise Mao Zedong Thought,’ the Ministry of Health worked in close conjunction with national propaganda organs to ready themselves for the impending visit of American president Richard Nixon in the winter of 1972. Indeed, AA was surprisingly close to the top of the list of activities planned for Nixon’s weeklong tour. A color film featuring the technique was hurriedly produced in time for his arrival, and Nixon’s own physician, Walter Tkach, spent an afternoon at a Beijing hospital where he witnessed three acts of surgery carried out under AA.

The procedures that Tkach and later American delegations would witness while in China were more than mere medical operations; they were performative acts of surgical ‘theater,’ each unfolding according to some predetermined script. Patients would walk into the operating room unassisted, accompanied only by the inevitable presence of a Little Red Book that they clung tightly to their chests. During the surgery, they drank tea, ate slices of orange, and made small talk with their flabbergasted spectators. And when the procedure concluded, the patients sat up – evincing no pain whatsoever – and walked unassisted out of the room. As Tkach later recalled, he had ‘seen nothing like [it] in 25 years of association with surgery.’ 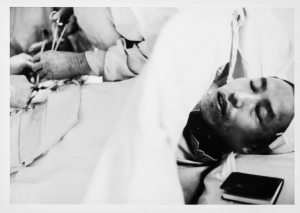 Tkach and visitors like him were sufficiently persuaded by the spectacle that they trumpeted the virtues of AA back home. As the surgeon Samuel Rosen wrote in a New York Times article, ‘I have seen the past and it works.’ Others, like the Chinese American physician Frederick Kao, pointed to AA as evidence of the longstanding efficacy of Eastern forms of healing. Inspired by his own research into the procedure, Kao would go on to establish The American Journal of Chinese Medicine to more effectively describe the applications of acupuncture in a biomedical language. To be sure, not everyone agreed with such rosy assessments as these, and many Americans who travelled to China insisted that the whole act was a hoax. But an equally vocal cohort was fully convinced of its efficacy, and they looked to AA as a way to bridge the gap between the medical – and political – worlds that separated China from the West.

Over time, however, and despite the brief furore that had arisen over the procedure, interest in AA would taper off almost as quickly as it had begun. Clinical trials in the US would go on to prove inconclusive, with no readymade explanation for why such a technique should work. And with the death of Mao Zedong in 1976, there was no longer a need to promote the values of Maoism or the achievements of Chinese communism to a curious West. Instead, as China continued to ‘open up’ to the outside world, the research and practice of AA ground to an immediate (and invariably unceremonious) halt.

Nevertheless, while AA itself may have experienced only a fleeting moment of infamy, one lesson the CCP learned from the affair was the use of Chinese medicine for patriotic and diplomatic ends. If the experience with AA had proven anything, it was the ability for Chinese medicine to conjure up powerful imaginaries of alternative paths to health – and to galvanise attachments to one’s ethnocultural roots in the process. With this in mind, the care packages that arrived on American soil during the early days of Covid-19 were hardly an unprecedented phenomenon. They represented, instead, the logical extension of a long trend in Chinese soft power: one that saw medical applications like acupuncture as a simultaneously nationalistic and diplomatic tool, capable of creating an imagined cultural community while foregrounding the independence and strength of the modern Chinese state.

Emily Baum is an associate professor of modern Chinese history at the University of California, Irvine. Her first book, The Invention of Madness: State, Society, and the Insane in Modern China was published by University of Chicago Press in 2018. She is currently writing a history of acupuncture in late twentieth-century China and the United States.