Contemporary China Centre Blog » Feeding the Future: The Politics of Aspiration in a Chinese Market Street

Feeding the Future: The Politics of Aspiration in a Chinese Market Street

I wanted to choose an industry where people needed the product every day, so I decided to make food, because people have to eat every day. The way I see it, regardless of how bad the economy is or how bad it might become, I can make food. So, for example, the most inconspicuous thing on the street, mantou 馒头, […] that is the kind of thing people really need in their lives. Even if you don’t buy anything else, you still have to buy mantou.

Doing my doctoral research on Taohua Street (see note 1), a fading market street in a Shandong county seat was, in a way, easy. As Mr Cai, the shopkeeper in the quote above, notes, everyone has to eat, everyone including me, and I ate my way through fieldwork. I arrived in Shandong interested in why people choose to work for themselves – what the aspirations are that guide them out of factories and into the stalls that supply local workers and canteens. As I visited shops for breakfast buns and noodle dinners, I found myself at one point in a broad set of relations that incorporates self-employed small traders into a massive economic project. People like Mr Cai cope with the precarity engendered by capitalist economics by seeking niches. They make themselves important to the routines of local workers and residents in the areas surrounding Taohua Street and quite literally maintain the workforce by feeding workers from nearby factories and offices. In doing so, they become nodes of production and consumption that produce value and keep it travelling around the economy.

Small-scale entrepreneurs (getihu 个体户) have historically played a major role in Chinese economic reform. They were pioneers who, during a period of mass collectivization, left the countryside to peddle wares in urban areas despite anti-capitalist stigma (Hsu 2007). Today, however, they form a much smaller part of the economy and exist lower down the pecking order. How should we understand the relationship between small-scale entrepreneurial aspiration and the situation of these traders within a national, developmental and globalized economy?

In my thesis (2021, see note 2), I argue that aspiration is a major motivator behind developmental labour, guiding workers through the vicissitudes of a tumultuous economy. This may seem obvious – of course people work to pursue better futures – but aspiration highlights the contradictions inherent to the coexistence of rapid development and stalling social mobility. On Taohua Street, aspirations appear quite apart from desires for fame or fortune. When what can be desired is limited by what appears realistic for people of limited resources, aspirations are often modest or even experienced vicariously on behalf of other people’s futures. People either delay their own gratification in favour of what appears to be a predestined triumphant future for the economy, the country and future generations, or they learn to desire within the bounds of what is possible in their circumstances. Both produce action to realise one’s own interests, constricted as they may be. This action, I argue, is political. It represents an everyday class politics that can be hard to see when the enemy is not an exploitative boss but the low standard of living that development will remedy.

On Taohua Street, most people see their jobs as, well, jobs. They’re a means to an end. Mr Li, who rises at 3:00 AM every day to make tofu and soymilk for the breakfast rush, confided in me while stirring coagulant into fresh soymilk early one morning that he doesn’t actually care for tofu. Migrant families from Qinghai and Shanxi, who set up shops selling Lanzhou pulled noodles (lamian 拉面) and fried bread (bing 饼), complain that they had little choice but to learn to make their local delicacies and move eastward to earn a living, even as they shiver at open counters through biting Shandong winters working jobs they hate, even if their children can’t join them in their toil.

In contrast, there are others who see their shops as luxuries bringing freedom beyond the shackles of the factory or the farm. Self-employment allows shopkeepers to stretch their schedules to fit their families’ needs. The shops also provide opportunities to pursue creativity and sociality. Compared to where these traders have been, this is the good life. 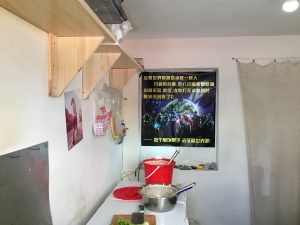 Ms Xu’s parents put their savings and much free labour into supporting their daughter’s sushi and curry shop catering to local schoolchildren, and Ms Xu happily dedicates her meagre free time to developing new recipes. Mrs Yang, a retired teacher, set up a shop to sell her favourite treats – fruits, nuts and cakes. Perched on her open shopfront, she chats with former students and their parents as they walk home or peruse the market. Friends come to catch up over walnuts and dried persimmons while Mrs Yang waits for customers. But the shop is not just a hobby. Mrs Yang uses it to lure in customers and, as they pay, she delivers her life insurance sales pitch, using the profits to top up her small pension.

Living in a turbulent economy, few on Taohua Street understand their jobs as permanent. They jump between workplaces, in and out of salaried positions (dagong 打工), sometimes working for themselves or setting up businesses with spouses, siblings or cousins, but always with an exit plan. Exit plans and side-hustles are a focus of conversation with friends, neighbours and relatives. Perhaps some shopkeepers will return to the factories when their businesses finally become untenable. Others will move away, maybe elsewhere in Shandong or, they dream, back home. Few are drawn to the megacities, so often presumed to possess boundless magnetism for people looking to better their fates. They imagine Beijing, Shanghai and even Qingdao or Jinan as too fast-paced, too expensive, too unliveable and unwelcoming.

For those on the lower rungs of this economic system, one’s own future is unreliable. The economy will continue to boom and bust. But in this developmental context, the future of the nation feels certain. This is, in the vein of Massumi’s (2010) description of the paradoxical logic of threat, another ‘future birth of the affective fact.’ Here, difficult labouring presents are legitimated and motivated by knowledge that development will come, development that is of course created by difficult labour carried out in the present.

When possible paths forward feel limited, this foreknowledge of a general future to come enables the formation of aspirations that can be acted upon through labour. As I see it, the actions of the traders of Taohua Street in the present amount to an everyday politics of building a better future in pursuit of these traders’ desires and dreams, tempered as they may be by the harsh realities they face. This striving, this labouring for a better future, might not resemble the mass politics of yesteryear. Still, against the limitations of the present, aspiration motivates action in service of one’s own interests or those of valued others. The everyday politics of aspiration has formed the basis for China’s rapid development. These moments of agency may pass without notice, but leave their trace in your bowl of curry, bag of soymilk or spring onion pancake.

Samuel Berlin (he/him) is a postdoctoral research fellow in the School of Geography, Earth and Environmental Sciences at the University of Plymouth. He is part of the Atmospheres of (counter)terrorism in European cities project (@AtmoCT) studying the affective experiences of terrorism, counterterrorism and securitization. He recently completed a PhD in Human Geography at the University of Bristol, where he studied the developmental politics of class through an ethnography of a Chinese market street. Sam also maintains a research interest in the politics and ethics of gender, sexuality and the body. Featured image: photo of Taohua Street in Autumn, taken by and shared with permission of author.