Music in the Disciplinary Regimes of Xinjiang’s “Anti-extremism” Campaign

Beginning in 2017, news began to leak out from China’s Xinjiang Uyghur Autonomous Region of the construction of a huge, secretive network of detention camps, dubbed “transformation through education centres” in official Chinese sources. Overseas journalists and scholars began to piece together the evidence, and by mid-2018 international organisations and national governments were raising concerns that well over a million Muslims–primarily Uyghurs but also Kazakhs and other Muslim peoples–had been interned in the camps for indefinite periods of time without formal legal charge. Reports by former detainees, teachers and guards, supported by satellite imagery, revealed a network of over a hundred newly built or greatly expanded detention facilities, heavily secured with barbed wire and surveillance systems, some of them large enough to hold up to 100,000 inmates.

Government documents leaked in autumn 2019 used the language of epidemic to justify these extraordinary abuses. Detainees were said to have been “infected” by the “virus” of Islamic extremism and must be quarantined and cured. In practice, as careful documentation by human rights organisations has revealed, enormous numbers of people have been detained simply for the peaceful pursuit of their faith, or because they had travelled abroad, or installed “suspicious” apps on their phones. Detainees include hundreds of prominent academics and Uyghur cultural icons.

In the testimonies of former detainees, regimes of forced repetition and self-criticism feature strongly. Detainees recount being made to recite repeatedly, “We will oppose extremism, we will oppose separatism, we will oppose terrorism.” Before meals they were required to demonstrate their gratitude to the Communist Party by chanting, “Thank the Party! Thank the Motherland! Thank President Xi!” As Gerry Shih observed, “the internment program aims to rewire the political thinking of detainees, erase their Islamic beliefs and reshape their very identities.”

Dancing Imams and the Disciplinary Power of “Little Apple”

Musical performance has played a key role in the “re-education” program. A leaked video clip which circulated on Uyghur exile networks in 2017 showed two rows of Uyghur detainees holding plastic bowls and singing the revolutionary song, “Without the Communist Party there would be no New China.” Former detainee Abduwali Ayup explained that these inmates were singing for their food; a daily practice noted in many accounts. Outside the camps as well, Uyghurs in villages and towns across the region were mobilised in weekly mass singing and dancing. Their repertoire included the canon of revolutionary songs, but also Chinese pop songs, notably the internet hit “Little Apple.” 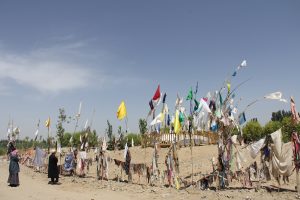 Worshippers at the Imam Aptah shrine near Khotan, one of many religious sites destroyed in the recent campaign. Image courtesy of Rahile Dawut, former professor of folklore at Xinjiang University, detained since December 2017.

Chinese media reports explicitly linked these activities to civilizing projects: countering religious extremism and fostering modernity. I have argued that these activities were intended to break down the embodied norms of Uyghur culture by enforcing forms of public behaviour that violated religious expectations. This was particularly striking in the case of the images of dancing Uyghur imams (religious clerics) which circulated on social media, and this singing and dancing formed part of a raft of measures including bans on beards and headscarves, beer drinking competitions, and proscriptions on halal food.

The Weaponisation of Music

In this context of mass incarceration and documented abuse, such coercive use of musical performance may be understood as an example of the “weaponisation” of music. Suzanne Cusick has described how US forces in the Iraq war also used music in detention centres as part of a package of measures designed to break down an individual’s identity and will. In Abu Ghraib, music videos were used against Muslim detainees as part of a set of attacks on their ethical sense of self. In Xinjiang’s detention camps we find detainees subject to very similar processes, in which the coerced singing of revolutionary songs is used to break down the embodied habits of religious and cultural identity, as part of a set of attacks on detainees’ will and sense of self.

Musical performance was also to the fore in the carefully choreographed visits to the camps organised in 2019 by the Chinese authorities for selected international media organisations. Staged in response to international concerns about mass human rights abuses, these visits sought to reassure the international community that the camps were in fact voluntary “vocational training centres” designed to re-educate people led astray by extremist ideology and prepare them for gainful employment. Assembled inmates sang the English song “If you’re happy and you know it clap your hands” for the press crews. The irony of these coerced displays of happiness was highlighted by international observers, but this was no more than the latest manifestation of the long-standing practices of the staged representation of China’s minority peoples through singing, dancing and smiling.

In the measures it has employed, and the ideological justification of its actions, China’s project to securitise Xinjiang and re-engineer its Muslim peoples can be read as a colonial project. As Dibyesh Anand has argued, built into colonial projects is the assumption that the Other is inferior to the progressive Self, which has the duty and the right to mould the violent and backward Other into its own image. The focus of the Xinjiang campaign on embodied practices is far from unique; we can find many similarities in its approach to re-engineering Uyghurs in other, historical colonial projects around the world.

In the Americas, studies of colonial rule reveal an almost obsessive interest in the embodied, performative practices of the subjugated–rituals, songs and dances–suggesting that colonial elites understood the importance of these practices for the expression and transmission of identity and memory. Diane Taylor suggests that an important aspect of the colonising project throughout the Americas consisted in controlling and discrediting indigenous ways of preserving and transmitting cultural identity. There are many parallels between these historical accounts and the events unfolding in Xinjiang in the 21st century. Just as Uyghur religious and cultural practices are dubbed religious extremism and terrorism in China, for example, so indigenous performance practices were dubbed devil worship under colonial rule in the Americas.

Sonic traces and the failure of re-engineering projects

But Taylor’s account also makes clear that the persistent attempts by the colonisers to erase these indigenous performance practices were matched only by their obstinate resurgence. She summarises: “the performance of the prohibitions seems as ubiquitous and continuous as the outlawed practices themselves. Neither disappeared”. Lessons from history warn against easy assumptions that the campaign in Xinjiang will achieve its goal of erasing the religious and cultural identity of its subjects and rewiring them as patriotic automatons.

In the crowded cell of the re-education camp where Gulbahar Jelil was held in 2018, the detainees were under constant surveillance, and strict punishments were enforced against anyone seen to be performing the movements of prayer. Gulbahar recounted how the women in her cell whispered to each other to “pray on the inside.” Even when they cannot be sounded out, the sonic traces of Uyghur cultural identity may be reactivated–internally, repetitively–through these simple acts of remembering engrained bodily practices. Such small acts of resistance hint at the possibility of sustaining embodied memory even under extreme conditions of coercion and control, and they suggest the inevitable failure of state projects of re-engineering.

Rachel Harris is Professor of Ethnomusicology at SOAS, University of London. Her research focuses on expressive culture, religion, and state policies in China’s Muslim borderlands. She led the Leverhulme Research Project ‘Sounding Islam in China’ (2014-2017) and is now working with Turan University in Kazakhstan on a British Academy Sustainable Development Project to revitalise Uyghur cultural heritage in the diaspora. Her new book “Soundscapes of Uyghur Islam” will be published by Indiana University Press in autumn 2020. She tweets at: @Rachel_A_Harris. Image credit: Tianshan Net, 2015.

Leave a Reply to christine martens