Repositioning Potatoes in the People’s Republic of China

In 2015, China’s Ministry of Agriculture announced a strategy to transform the white potato (Solanum tuberosum) into a staple food for the Chinese nation. Policy documents and promotional literature allege benefits to raising the potato to the status of grain staple on a par with rice, wheat, and maize. These include furthering national self-sufficiency in grain; helping to alleviate rural poverty; boosting the nutritional health of the population; promoting environmental sustainability in agriculture; and modernizing food production.

In this blog, which draws on two previous publications (Klein 2019; 2020), I do not assess the successes or claimed benefits of potato ‘stapleisation’ (malingshu zhulianghua 马铃薯主粮化 / zhushihua 主食化 ). Suffice it to say that there is no evidence of a national surge in potato-eating since 2015. Instead, I explore some of the cultural dimensions of the state’s attempts to convince the Chinese to eat more potatoes and embrace them as a staple food. How have potatoes historically fit in Chinese foodways, what new meanings do potato-promoters attempt to attach to the tuber, and what might potato promotions tell us about the role of the party-state in China’s contemporary food culture?

It is hard to overstate the importance of grains and grain foods to Chinese politics, culture, and social life. The success of the harvests of rice, wheat, and (at one time) millets, their collection, storage, and distribution have been central to the operations of Chinese states and their attempts to realise the longstanding moral imperative to ‘nourish the people’ (yangmin 养民 ). In households, cooked grain (fan 饭) has been the core feature of daily meals. Typically, people cook and serve unseasoned grain separately from side dishes (cai 菜) of vegetables, legumes, and animal flesh. Grain has been vital to the sustenance of human life in this historically largely agrarian society. The sharing and eating of cooked grain foods also nourish relationships of family and kinship. Offerings of cooked grain similarly sustain the ancestors and strengthen their ties with living descendants. Fan, be it of rice, wheat, millets, or maize, has stood for ‘food’ itself.

This is not to deny the significance of taro, sweet potatoes, and other roots and tubers. The white potato originated in the Andes and was first introduced in China in the seventeenth century. By the end of the nineteenth century, it had become a widespread crop, especially in many inland and highland areas in the Southwest, West, and North. Here, its resistance to drought and frost made it popular among farmers, who exchanged it with other farmers and developed numerous local potato cultivars, some of which have recently become state-protected heirloom varieties. Unlike grains, until the 1990s potatoes received little attention from Chinese states or crop scientists. Nevertheless, by the 2000s China’s annual potato crop was larger than that of any other country.

Known by a variety of names, including yangyu 洋芋 (‘foreign tuber’), tudou 土豆 (‘earth bean’), and shanyaodan 山药蛋 (‘yam egg’), white potatoes have become integrated into regional cuisines. Popular potato foods include ‘stir-fried potato slivers’ (chao tudousi 炒土豆丝) and ‘three fresh flavours of the earth’ (di san xian 地三鲜), a dish of sauteed potatoes, aubergines, and green peppers common in China’s Northeast. In parts of Yunnan in the Southwest, vendors of barbecued and deep-fried potatoes line the streets of towns and cities, serving them with a variety of dipping sauces they often make themselves. 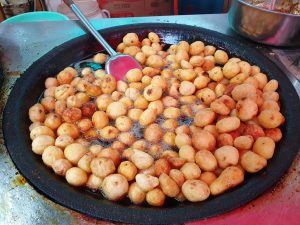 Deep-fried potatoes at a Kunming street market, 2019 (photograph by the author)

However, the potato has typically not been regarded in China as a staple food, but as an ingredient fit for side dishes or snacks. Where and when it has been consumed as a core staple it has often been treated as one of necessity, not of choice. People in Yunnan have told me that they were ‘raised on maize and potatoes’, meaning that they grew up in an impoverished, mountainous area. One young woman who had moved to Kunming, the provincial capital, described to me how she was ridiculed by friends in Kunming for being a potato lover from Northeast Yunnan, a notoriously poor part of the province.

State-backed promotions of potatoes encourage the acceptance of the potato-as-staple through productions such as popular science books, cookbooks, trade fairs, and a documentary film, A Bite of Potato, made in the style of the popular A Bite of China series. A key language deployed in these promotions is that of nutrition and health. Potatoes are lauded for being a great source of potassium, vitamin C and other minerals and vitamins. Some books even claim that the potato helps people to keep slim, avoid hypertension, and protect against certain cancers – claims meant to appeal especially to relatively affluent, sedentary urban populations. The potato, from this perspective, is a modern superfood.

Another language used is culinary, suggesting that people’s aversion to the potato as a staple food is not only to do with its symbolic associations with poverty but also that its taste and texture may not fit easily with Chinese embodied senses of a proper staple food. One culinary approach taken is that potatoes are easily integrated into existing diets: most of the potato staples promoted are familiar foods such as steamed bread or noodles, where a percentage of the wheat or rice flour ordinarily used has been substituted with potato flour. But some of the promotional media celebrate traditional potato staples from rural inland China, such as ‘potato dough balls’ (yangyu momo 洋芋馍馍) form Shaanxi and ‘potatoes boiled in an iron wok’ (tieguo zhu yangyu 铁锅煮洋芋) from Gansu.

Potato promotion is in some ways reminiscent of the social engineering of the high socialist decades of the 1950s-1970s. Yet despite the flourishing of high socialist and nationalist rhetoric under Xi Jinping, the party-state’s commitment to a ‘socialist market economy’ is evident in the potato promotions. Chinese dietary culture is to be modified through state guidance and market mechanisms, not through central planning and rationing. Some of the cookbooks and pamphlets do suggest that it is a citizen’s patriotic duty to eat potatoes to enhance the nation’s health and its food security. Nevertheless, state promoters of potato-eating are essentially competing in a marketplace of ideas about diet, health, and cooking, one which includes, for example, low-carbohydrate diets that advocate avoiding potatoes to lose weight.

Even the emphasis on local, Chinese potato traditions in some promotional material is less an element of state-sponsored patriotism than a recognition by potato-promoters of the growing desires among middle-stratum Chinese for the ‘authentic’, ‘pure’ foods of impoverished, rural inlands. These desires are themselves driven in part by a crisis-ridden food system that the party-state has notoriously struggled to regulate. Together with potato ‘stapleisation’ itself, such desires have created new opportunities for entrepreneurs, local officials, and gastronomes in marginalised areas such as Northeast Yunnan to repackage their potatoes and potato foods to tourists and urban markets as emblems of local heritage and traditional cuisine, even as these actors may themselves be uneasy about being branded as ‘potato lovers’.

Jakob Klein is Senior Lecturer in Social Anthropology, SOAS University of London. He convenes an MA programme in the Anthropology of Food and chairs the SOAS Food Studies Centre. Klein is the co-editor (with James L. Watson) of The Handbook of Food and Anthropology (Bloomsbury, 2019) and (with James Staples) of ‘Consumer and Consumed: Humans and Animals in Industrialising Food Systems’ (special issue of Ethnos, 2017). His research interests include Chinese regional cuisines, food heritagization, and meat eating and vegetarianism. Image credit: author.