Aunt Wang had accompanied her son and his young family as domestic support while her son worked in an urban area. When her first daughter-in-law left in divorce shortly after the birth of her grandson, she took on the boy’s full-time care in the absence of his mother. When I asked her what kinds of foods she ate and how she cooked them, she laughed and said, ‘Me? I am so luohou 落后 (backward or uneducated), I still shaoguo 烧锅 .’

Shaoguo is both a method and an appliance specifically constructed in Henan homes (see note 2). The term shaoguo is used specifically in Henan and neighbouring provinces to refer to the use of a large stove that burns agricultural refuse to heat a large wok. 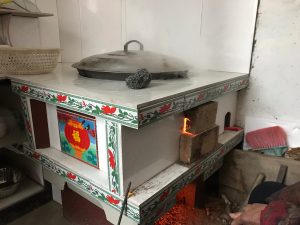 I had come to study in a small village in rural Henan province as part of my doctoral research studies investigating the lives of left-behind children and their caretakers, but it seemed that the only conversation that locals wanted to have was about food. I came to realise that food matters not only in the what, but also in the how and who: that is, how is a good meal made? And who is responsible for its making?

I’ve focused on the method of shaoguo in particular because of shaoguo’s multivalence to local people. At once a superior and inferior cooking method, it can represent the complex ways that rural people feel about themselves and their way of life.

Biomass stoves, because they make use of agricultural wastes and dried twigs, are assumed to be the most basic of technologies and required only a primitive kind of knowledge. Gas and electric stoves, on the other hand, reliant on purchased materials and electric or natural gas infrastructures, were assumed to be at the ideal of modernity.

Meaning ‘backward,’ ‘undeveloped,’ or ‘to lag behind,’ the term luohou is inherently comparative. To ‘be behind,’ one must always be behind something or someone. Luohou is utilised in conversations about economic development. This echoes scholarly and popular accounts describing rural space as failures of modernity.

Biomass stoves were also understood as dirty because it required the storage of agricultural wastes. Dried corn stalks and piles of dried cobs usually sat in the kitchen space, attracting mice and spreading a fine dust throughout the kitchen. This dirt was criticised as unsightly and contrary to an orderly and neat rural space.

Despite the widespread acknowledgment of the failures of biomass stoves, however, most rural women, particularly older rural women, continue to cook with recycled agricultural wastes and even preferred this way of cooking. Shaoguo was economical, making use of the corn and wheat waste products that were otherwise unused. Shaoguo also used a thick iron cooking surface and therefore imparted iron into the daily soups made in them. This nutritional content was important for poor families who did not have regular access to iron-rich foods.

Perhaps most importantly, shaoguo created a superior flavour in staple foods. Shaoguo is useful in the cooking of two Henan staples: mo (steamed bread in Henan dialect, mantou 馒头 in Mandarin) and hetang (soup in the Henan dialect, made from boiled water and flour, miantang 面烫 in Mandarin) (see note 2).

For wheat-consuming Henan people, these humble staples were not only the food they most enjoyed, but also the foods which felt most like home. Migrants returning from the rice-based cuisine of the south expressed cravings for local staples. In one family meal I attended, the migrant Dawei, recently returned from Guangzhou, stated that even though he didn’t like the flavour, the bland thick soup, hetang, was a part of an experience of being home. ‘When I am home I drink hetang, it’s not that I like (xihuan 喜欢) it, it’s that I am used to (xiguan 习惯) it.’ 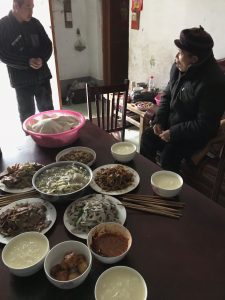 In multi-generational families affected by migration, older women undertake the majority of food preparation while their daughters-in-law work in the township and urban centres. Despite the physical demands placed upon older women, these novel divisions of labour facilitate the conservation of traditional cooking methods such as shaoguo. Recently a spate of new urbanised housing units has radically changed the area immediately adjacent to my fieldsite, yet, with few exceptions, new housing in the village continues to have biomass fuel stoves. Younger couples expect the older women of the family to cook most of the meals and thus provide a kitchen optimised for rural cuisine. One family I knew owned an urban-style apartment in the township with a modern gas-fuelled kitchen, but they stayed in their village house so that the older woman could continue to cook in a familiar kitchen with a biofuel stove.

What do cooking methods tell us about belonging in rural spaces affected by migration? For rural people, at once excluded from modernity because of poverty and welcomed into rural life for the same reasons, shaoguo is an exemplary indicator of their very exclusion from larger orders of urban or cosmopolitan belonging.

In rural China, shaoguo produces unique affordances for community and family belonging—throwing the regional differences in food preferences into stark relief. As particularly immobile and even impractical, biomass stoves are ill suited to densely populated and fast-paced urban life, creating stark differences in the everyday food of rural and urban areas. Displaced from familiar sensations, returning migrants desire nostalgic foods from their childhood to re-enact a familiar sense-scape and recreate home even if much of their rural homeland has changed. These desires, shared by migrants returning home, have the potential to create a consciousness about rural conditions that may not have been possible without the displacement of migration.

Migration has radically reconfigured gender and age-based roles and has helped to solidify older women’s roles as the provisioner of food. This has supported the conservation of ‘traditional’ cooking methods like shaoguo, so that newly built homes continue to have biomass stoves despite many younger women’s concerted efforts to obtain more modern appliances such as washing machines and refrigerators. As these older women are also cooking and caring for young grandchildren, they hold a prominent role in socialising the next generation into what good food tastes, smells, and feels like.

Shaoguo is at once empowering and disenfranchising, as shaoguo is imparted with both positive and negative valences. Despite disparaging labels of backward or dirty, older women in rural Henan maintain creative resistance in their cooking tradition that displays the profound resiliency of taste, comfort, and habit. Shaoguo is central to the practice of creating home.

Erin Thomason earned her PhD in Anthropology from UCLA. She is currently Assistant Professor of China Studies at Xi’an Jiaotong-Liverpool University in Suzhou, China. Her work examines family dynamics in rural China with a special focus on caretaking practices of families affected by migration. She has been published in Gastronomica and Journal of Consumer Studies. Her work is featured in the edited volume, Families Upside Down (Brill, 2021). She is currently writing a manuscript based on her ethnographic work in rural Henan. All images taken by author and shared with permission of those photographed.