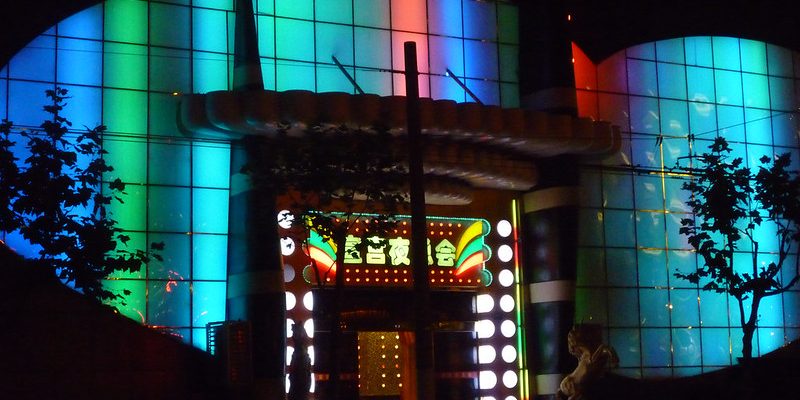 Fashion has always been the key for me in noticing a rural migrant karaoke bar hostess during my research with them in Dalian, China (Zheng 2009). On the street, it is hard not to spot a hostess wearing exotic fashion and with a distinct appearance. Indeed, they are fashion trendsetters and bright components of the human landscape in Dalian. Their fashion ensembles challenge traditional Chinese sartorial practices in a myriad of ways, including exposing large portions of the body, combining ostentatious and outlandish colours, and featuring irregular styles and unfamiliar cuts. Their attire is derived from foreign or foreign-inspired fashion products.

From head to toe, rural migrant karaoke bar hostesses are covered in Korean and Japanese fashion. These fashion products include, but are not limited to, plastic hair trinkets, scarlet hair dye, fake second eyelids, fake eyelashes, fake tattoos, cosmetics such as whitening cream and black lipstick, bracelets, clothes, and pointed-toe shoes. Almost all hostesses’ feet are sheathed in pointed-toe, high-heeled shoes which were first introduced from Korea and later produced and manufactured in China. Their black or other dark-shaded lipsticks are also produced and manufactured in Korea, inspired by Korean movie and music celebrities. Their cell phones are adorned with Japanese Hello-Kitty-emblazoned transparent plastic baubles that flash blinking lights upon every incoming call.

The Japan-Korea Wave can be seen in the popularity of Japanese and Korean products either directly imported from Japan and Korea or copied and manufactured in China. These products include, but are not limited to, comic books, DVDs of film, TV series, and singing idols. Many Chinese youth adore and follow the Japanese popular looks of bleached white or blond hair streaks, white eye make-up, tubular-front elevated shoes, or Hello-Kitty embellishments. However, this pursuit of Japanese popular culture was stymied by the nation-wide anti-Japanese boycott movements in the 2000s (Gerth 2003).

In contrast, the popularity of Korean cultural products in China continued without animosity, mainly because both China and Korea were victims of Japan during the World War II and an affinity between the two countries was felt by many. Korean popular movies, TV dramas, and singing idols flooded the Chinese consumer market and were consistently the highest rated nation-wide for many years. Under this influence, many Chinese youth copied the Korean style and started Chinese Hip-Hop and R&B bands. Young people also pursued Korean-style plastic surgery and Korean-style scarlet red long hair, fake stick-on tattoos, drawn-on thin eyebrows, fake double-eyelids, black or dark shades of lipstick, pointed-toe high-heeled shoes, and other lace embellishments. A fervor developed towards Korean fashion that eschews simple colours in favor of juxtaposed, outlandish colour and features a tight, transparent, and skimpy style that exposes skin, irregular skirt opening, vests or bellybands exposing the whole or half of the back, and singled-shouldered style.

Chinese popular media compared the Korean Wave to rural migrant karaoke bar hostesses. For example, as one piece published by Shenzhen Weekly (Shenzhen Zhoukan) noted, “Korea almost seems like a young country girl who suddenly arrives in the city. She sees all kinds of strange and novel things and doesn’t wait a second to try them out on herself. The result is an odd-looking mess of colours. It seems to be ultra-extravagant (chaoxuan) and ultra-modern (chaoxiandai), but in fact it cannot cover up her country air (tuqi). Country air goes hand in hand with Korea’s astonishing rise to wealth (baofu). We can see the same sort of cultural mentality reflected in those Chinese youth who hold the Korean Wave in highest esteem” (Wang 2002: 41).

Anthropologists Sandra Niessen and Ajun Appadurai have pointed to attire as a class-signifier (Appadurai 1996, Niessen 2003, Wilson 1992). In China, the anti-peasant derogatory term “tuqi” (country air) applies the concept of qi, an essence or energy, to all peasants, to reify them as country bumpkins whose bodies are seen as radiating a rustic and unstylish essence. Indeed, many urbanites claim that, even though rural migrants in the city shed their countryside clothing and refashion themselves in new clothes, the tuqi essence of their rural origin can never be concealed by this disguise, instead seeping through their dark skin and “ultra-flashy”, “ultra-modern” fashion to give away their rural origin. In other words, their rural origin impedes them from being perceived as capable of fully grasping the ‘true’ aesthetic sensibility of modern fashion, a foil against which urban women’s mastery over fashion is staged. Since fashion is perceived as an embodiment of urban women’s membership in a global, modern community (Johansson 1998, Schein 1999), the alleged fashion ineptitude of peasants denies them this membership.

The opposite term of tuqi is yangqi – sea, ocean essence. Yang signifies a foreign world outside China, and yangqi represents a foreign, stylish essence, associated with urban women. Rural migrant hostesses employ a “ultra-fashion” strategy to perform fashion by avoiding tuqi and striving for yangqi, thus resisting the “rural tuqi – urban yangqi” hierarchy and imagining a sense of global belonging and citizenship. They appropriate the Japan-Korean fashion as the most visible hallmark of social status to claim their legitimate membership in the global community and destabilize, subvert, and transgress the rural-urban class hierarchy. They deride urban women’s conservative, parochial fashion sense and stake a political claim to the cosmopolitan, global community with their foreign, “ultra-fashion” that heralds them trendsetters at the forefront of China’s fashion landscape (Zheng 2011).

Note This article is adapted from Zheng’s 2011 article: “Karaoke Bar Hostesses and the Japan-Korean Wave in China: Fashion, Cosmopolitanism, and Globalization.” City and Society, 23 (1): 42-65.

Tiantian Zheng is SUNY Distinguished Professor of Anthropology at State University of New York, Cortland. She holds a Ph.D. in Anthropology from Yale University. She is the author and co-author of nine academic books, five edited journal issues, 26 refereed journal articles, 26 refereed book chapters, and 43 invited book reviews. She has received two national book awards and one “Outstanding Academic Title” by Choice. She has testified before Congress, UNAIDS, and the United Nations on human trafficking and other issues, and has been a featured guest speaker on NPR, BBC, and NBC. Dr. Zheng has delivered over 90 papers at national and international conferences, and over 70 invited talks by national and international universities and organizations. Image credit: Flickr.